A Nuclear Plant that Uses Wastewater 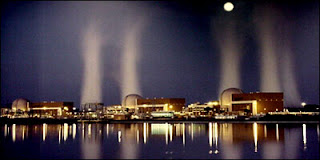 About every summer, nuclear energy opponents like to dust off their talking points by rehashing the claims that nuclear plants can't survive in the summer. This is due to the fact that droughts can possibly affect a plant's ability to cool themselves during operation. NEI then dusts off our prepared talking points in response and then the debate usually takes off in all directions.

A key rebuttal piece to the opponents that often gets lost or forgotten in the debate is the fact that the largest nuclear plant in the U.S., Palo Verde, is in the middle of the desert and uses wastewater to cool itself. So it was great to read a post by Kate Galbraith at NYT's Green Inc highlighting this plant's features.

“This is a desert here. We don’t have any choice,” said Jim McDonald, a spokesman for Arizona Public Service, which operates the Palo Verde plant and owns the largest share of it. He believes it is the only nuclear plant in the country to reuse treated wastewater — which it has done since opening in 1986.

He emphasizes that the wastewater, which comes from Arizona’s biggest cities and is brought in by pipe, is treated again at the plant. All of it evaporates from a pond after being used at the plant, and the pond “becomes very similar to the Great Salt Lake — a heavy concentration of salt,” he said.

Palo Verde provides power not only to Phoenix but also to Los Angeles nearly 500 miles away. PV recently broke its own record for most electricity produced in a summer in 2008 and is a key plant to meeting the demands of the burgeoning population in the Southwest.

Let me tell you, I grew up in Phoenix and those summer temperatures are hot. There is hardly a day in the summer that the temperatures don't hit at least 100 degrees and you don't want to be in Phoenix during those times without electricity and air conditioning.

So next time the debate centers on nuclear plants and their claimed "inability" to provide power during the hot summer temperatures, remember to bring up how PV does it in the middle of a desert. The only way Palo Verde won't have enough cooling water is if the 4 million residents of Phoenix stop flushing their toilets. You can pretty much guarantee that won't happen. :-)

Picture of Palo Verde at night, ain't it pretty?

Marcel F. Williams said…
I've made this exact point many many times before. But the next time, I'll just simply post a link to your excellent post on this subject.