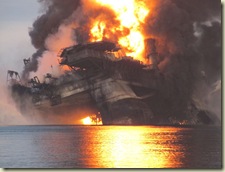 As with the Massey coal mining disaster, we have next to no comment about the whys and wherefores of the BP Energy disaster – well, except the energy sector has had too many incidents that can be described as disasters. The media is already too jammed with commentary about something that will not be fully explained for awhile and not fully understood until awhile after that. So why add to the static?

But one minor meme made the nuclear radar hum and that’s the comparison of the BP spill with Three Mile Island. In practical terms, the comparison is not at all apt. The Three Mile Island accident had no environmental impact and no one died. Neither can be said of the oil spill (though no one has died due to the oil itself – the 11 rig workers, sadly, got caught in the explosion leading to the spill).

Stephen Dubner at ’ Freakonomics blog gets this about right in a post titled (sigh!) “Will the Gulf Oil Spill Be This Generation’s Three Mile Island?”

While other countries soldiered on — France, Japan, Switzerland and Sweden, to name just a few — the U.S. turned away from nuclear, in large part because of public and political fear generated by what turned out to be a relatively harmless accident. There were other barriers to nuclear, of course, including cost overruns and regulatory nightmares; but once the sentiment turned, those more substantial barriers became secondary.

We’d change “relatively harmless” to harmless, but okay – folks did get shook up, so it’s an arguable point. His summation is pretty good:

That said, could the Gulf disaster be just the kind of tragic, visible, easy-to-comprehend event that crystallizes the already-growing rush to de-petroleum our economy? As with TMI, it won’t do much to change the facts on the ground about how energy is made. But as we’ve seen before, public sentiment can generate an awful lot of energy on its own, for better or worse.

As usual when trying out predictions, the answer is Who can say?

How about this for a title? “Oilpocalypse Is Obama's ... A. Katrina, B. TMI, C. None of the Above” Atlantic writer Marc Ambinder is more interested in the Katrina comparison – no is his answer there – and here’s what he says about the TMI connection:

It is true, however, that offshore drilling is dead in the water as a policy anytime soon, much like the Three Mile Island accident soured politicians and the public on nuclear power. There are also some valid parallels about the political imperatives to find cheaper sources of energy.

So, that’s the pattern. TMI metaphorically represents the partial shuttering of an industry due to an accident followed by media and public (over)reaction to the accident.

But that’s so limited and cramped.

The most intelligent use of this meme we’ve seen is this article from Forbes:

The Kemeny Commission [appointed by President ] did not go on a witch hunt, delivering a report within five months that arguably was of more substantive help to industry than it was of political help to the administration.

Writer Mark Mills goes on to talk about the creation of the Institute for Nuclear Power Operations, or INPO.

INPO not only set safety and operational standards, but through force-of-membership (and associated, training, certification and insurance "teeth") policed industry operations. Being able to operate a nuclear plant requires today joining and achieving INPO levels of excellence, certified independently in effect by your peers.

INPO was an industry initiative and coalesced at the same time the Kemeny Commission deliberated, so both government and industry took a hand in reassuring the public and enjoyed success doing so. TMI'’s negative impact on the nuclear energy industry was quite significant, but nuclear energy still produces 20 per cent of America’s electricity, the lion’s share of carbon-emission free generation. Imagine where we’d be now if all nuclear plants were shut down then in a panic.

And here’s the capper:

Following the lessons of TMI, the offshore industry should form an Institute for Offshore Drilling Operations (IODO, or some such name) emulating INPO, to create global standards of excellence. There are differences between offshore oil and nukes to be sure but at the scale and scope both play in, precious few. They are both high-risk mega-scale multibillion-dollar platforms.

And that’s how you use an inexact comparison – find the areas where the two element can be made to align, align them and dismiss the rest. An excellent, constructive article.

Marcel F. Williams said…
The US military is already talking about using nuclear power plants to manufacture jet fuel from water electrolysis and biowaste. And we've known how to use electricity to make gasoline, diesel fuel, jet fuel, methanol, and methane from water and garbage for decades.

There's no logical reason why every town, city and state in America can't become a carbon neutral synfuel producer by using nuclear or hydroelectric power combined with rural and urban biowaste.
May 4, 2010 at 10:55 PM

DocForesight said…
As with most reactionary responses, there appears to be a lack of perspective - historical, geographic, quantitative, etc.

A burning oil rig makes "great" news footage because everyone can see it while a burning underground mine or a nuclear incident is less visible.

Historically, how does this accident and spill compare to others - shipping or drilling? How does this compare to natural oil seeps fouling the oceans?

The lack of energy literacy in the news media and among political leaders is deplorable. Let's not add to it - particularly at the expense of the lives lost.
May 5, 2010 at 1:02 PM

Phil said…
Hey DocForesight what do you think of how this news coverage compares to blackwater spills from coal processing?

Coal slurry spills are horribly devastating, but that's in Appalachia where poor people live, not on the Gulf Coast.
May 5, 2010 at 2:44 PM