NOAA Looks at the Waters Near Fukushima Daiichi 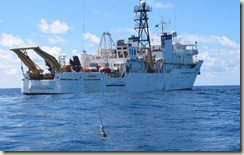 The American National Oceanic and Atmospheric Agency sent a research vessel boat to Japan last April to study the waters near the Fukushima Daiichi facility and assess the impact of radioactive isotopes released into the water by the plant. The international team of researchers found isotopes of cesium, which was expected, and silver, which was not expected. (Radioactive silver has a half-life of 250 days).

The conclusion in the abstract: “Radiation risks due to these radionuclides are below those generally considered harmful to marine animals and human consumers, and even below those from naturally occurring radionuclides.”

And that’s striking. Especially interesting was this:

To be comparable just to doses from 210Po, 137Cs levels in fish would need to range from 300 to 12,000 Bq·kg−1 dry weight, some 1–3 orders of magnitude higher than what we observed ≥30 km off Japan. Thus, radiation risks of these isotopes to marine organisms and human consumers of seafood are well below those from natural radionuclides.

Finally, these levels are several orders of magnitude lower than those used in one study that assumed exposure to the most heavily impacted water discharged from the Fukushima NPPs [nuclear power plants] to predict marked reproductive effects and possible mortality in marine biota.

Biota is the flora and fauna of a region.

These are very heartening findings. Still, the authors are careful not to overstate the case:

Ultimately, though the radionuclide levels of 137Cs and 134Cs offshore are currently low with respect to human health effects, any assessment of radiation dose should also consider long-term exposure if the NPP remains a continued source of radionuclides (5) and if, as has been reported, coastal sediments are contaminated with multiple radionuclides.

Those “if”s require a different study.

As the samples above show, the paper can be appropriately dense, but still readable by non-experts. Do take  a look at the whole thing.

The NOAA ship Ka'imimoana (Hawaiian for “ocean seeker”) was used for the research described in the paper.

jimwg said…
Wonder how fast and prominently the media is going to lap these official findings up...

jimwg said…
What's curiously overlooked in media reviews of Mark Lynas' mentions of (supposedly) Fukushima radioactivity found in kelp is that the man very deftly only states that radioactivity was DETECTED in kelp, NOT whether it was actually harmful or even just background. Just because you can detect agents or poisons in tiny amounts doesn't mean the whole barn is condemned. You can can detect arsenic in apple seeds; does that mean bar apples? What other baddies in tiny amounts around us aren't being reported?