By Eric McErlain April 10, 2013
The following is a guest post from NEI’s President and CEO, Marv Fertel.

Through its 26 founding members, AIF became the organization that launched the U.S. nuclear industry as it worked to bring the commercial uses of nuclear energy and nuclear materials to benefit America and the rest of the world. We can thank the visionary leaders over the early years, leaders like John Simpson of Westinghouse, Bert Wolfe from General Electric, Jim O’Connor from Commonwealth Edison and many others who guided the industry through tremendous research, technology advancement and promise. During this time, the Atomic Energy Commission (AEC) played a dual role as both advocate and supporter of technology development as well as the safety regulator. 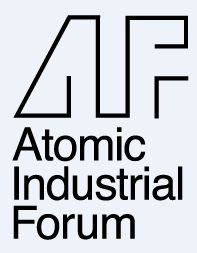 The 1970s saw great change in America’s energy demand and supply. As a result of the mideast oil embargoes, the world experienced the double whammy of a deep recession and double-digit inflation. Electricity demand in America plummeted from 7 percent and 10 percent annual growth rates to 1 percent to 2 percent. Hundreds of new power plants, both nuclear and coal, were cancelled. Even in these circumstances, our industry completed 81 reactors during the period 1960-1980 making nuclear energy our second largest source of electricity after coal. Also during this time the Nuclear Regulatory Commission was established as an independent regulator of nuclear safety.

During the mid-'70s, our industry leaders saw the need for a focused congressional lobbying organization and established the American Nuclear Energy Counsel (ANEC), initially led by John Conway from Consolidated Edison Company and George Gleason who came from AIF. Tom Kuhn, currently the CEO at the Edison Electric Institute (EEI), was actually the second CEO at ANEC.

Then, in 1979 we experienced the accident at Three Mile Island (TMI). While the accident had no public safety consequences, it did significantly expand our industry’s focus on operational safety – a focus that then and now has made nuclear energy much safer. Through the leadership of individuals like Bill Lee, the Institute of Nuclear Power Operations (INPO) was formed to focus our industry on always striving for excellence in operations. To address public education and communications the U.S. Council for Energy Awareness (USCEA) was established with Harry Finger as its CEO.

Later in the '80s, Byron Lee and Joe Colvin became the leaders of NUMARC, the Nuclear Utility Management and Resources Committee, established by the utilities to interface with the NRC on generic technical and regulatory issues. 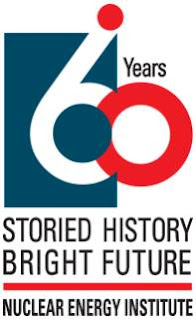 Finally in 1994, the industry's leaders consolidated ANEC, USCEA, NUMARC and the nuclear fuels and waste activities at EEI into one organization, the Nuclear Energy Institute, to provide a unified voice to foster the beneficial uses of nuclear energy and technology in America and around the world.

I’ve had the honor and pleasure to have worked in our industry since 1968 in engineering, licensing, building plants and supporting operating plants. I spent two years at AIF when its headquarters was in New York in the early '70s. I joined USCEA as the vice president for technical programs in 1990 and moved to NEI when it was established in 1994. This journey has been very rewarding-mostly because of the wonderful men and women in our industry I’ve had the good fortune to work with and get to know every step of the way.

The theme for NEI's 60th anniversary is “Storied History, Bright Future.” We will celebrate our history over a 60-day period from April 10 to June 8 including events at NEI’s Nuclear Energy Assembly, May 13-15 in Washington, D.C. and with special events with current and former employees and members.

So much has happened that we can be proud of and can learn from over the last 60 years. Our bright future is exemplified by the more than 9,500 young women and men who comprise our North American Young Generation in Nuclear (NAYGN) and the almost 5,600 members of U.S. Women In Nuclear (WIN). In just under five weeks, hundreds of NAYGN members will join us in D.C. at the Nuclear Energy Assembly, bringing enthusiasm, knowledge and energy. The bright future is also evidenced by the five new nuclear energy facilities under construction (V.C. Summer in South Carolina, Vogtle in Georgia, and Watts Bar in Tennessee), the expansion of our domestic uranium enrichment facilities, the construction of the MOX facility at the Savannah River site and the more than 70 nuclear plants under construction and 164 planned worldwide.

The foundation of this bright future is based on the real value that nuclear energy and nuclear materials bring to mankind. Whether it’s how nuclear medicine helps save lives, how nuclear materials do everything from enhancing food supplies to checking welds and filling beverage cans, or how nuclear energy provides reliable clean air electricity 24/7, our quality of life in America and worldwide is significantly enhanced. It is for reasons like this that Bill Gates is pursuing advanced nuclear technology and that environmental leaders like Patrick Moore, a founder of Greenpeace, have become nuclear energy advocates.

As we look to the future we must always keep our focus on safety as our top priority when operating our facilities and handling radioactive materials. Also, those of us who have experienced the storied history of our industry have a responsibility to effectively transfer knowledge to the extremely talented young women and men who will become our future leaders. As we navigate the various challenges facing our industry, NEI and its 350+ member organizations will continue to strive toward our vision: nuclear energy is recognized as an indispensable part of America’s energy security, environmental stewardship and economic development in the 21st century.