Nuclear Numbers Up in France 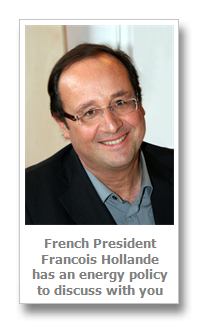 A poll over at Ouest France shows that support for nuclear energy has risen over the last two years, to the point that the percentage of people who do not support it has become strikingly small – at least among those with an opinion. Since there is no English version of the site, let’s look at the numbers as reported by World Nuclear News:

That leaves out half the population. What about them?

About a third of the population polled (34%) described themselves as "hesitant", or undecided, towards nuclear energy. Ifop [the polling firm] notes that for the first time since Fukushima, the pro-nuclear percentage of the population outnumbers the undecided. Meanwhile 16% of respondents said they had no opinion at all on the subject.

Hesitant and undecided are not the same thing, so I’ll assume these are two different groups squashed together. These folks are reachable – if Electricite de France is working for their support, it’s working. From an American perspective, meanwhile, the high number of hesitants can seem a case of French intransigence. But that’s a cliché,right?

59% of those polled agreed that France should maintain its current nuclear share in order to ensure its energy independence, up from 54% in a study carried out in March 2013.

The high on this metric was 67 percent in 2008, so the number here is getting better from what I assume is its low after the Japan accident. And it shows that the French fully understand that their country is rather resource poor – the reason it invested so heavily in nuclear energy back in the 70s.

Why care? Well, in a way, we need not. France could do with a little energy diversity – putting all its eggs in the nuclear coop has caused some issues in charging electric cars, at least it might theoretically  – and French President Francois Hollande wants to reduce the share of nuclear energy from about 80 percent to 50 percent. The poll numbers suggests this might be a harder sell than when Hollande ran for office last year, so, consequently, there will be a good deal of interest in his administration’s new energy policy when it is issued this fall.

This policy seems to be at the root of the poll and some of the news stories emerging in the French press now. Nuclear energy wasn’t precisely on the ropes last year when Hollande won the presidency and it’s even less so now. It’ll be interesting to see the reaction if the policy is markedly nuclear–unfriendly.

jimwg said…
If those figures are accurate, I highly suspect that the main reason is the silver lining of Fukushima's dark PR cloud; a meltdown -- Multiple Meltdowns at one crack -- don't spell Doomsday, forget tiny occassional catastrophes like oil and gas accidents putting away whole neighborhoods. In fact, Fuku was a big letdown to more than some...

Re: "putting all its eggs in the nuclear coop has caused some issues"

Gee whiz! Aircraft carriers put all their eggs in a single nuclear basket and do damn fine, so why can't whole cities and countries? No one squawked about baskets and mixes when King Oil was running things over a hundred years virtually all alone! Solar folks don't hawk "mixes" when they shout about ultimately running the whole world on sunlight, so why should nukes?

Marcel F. Williams said…
"France could do with a little energy diversity – putting all its eggs in the nuclear coop has caused some issues in charging electric cars, at least it might theoretically – and French President Francois Hollande wants to reduce the share of nuclear energy from about 80 percent to 50 percent."

While methanol electric power for peak-load energy would be significantly more expensive than baseload nuclear power, it would only represent a small percent of the total electricity produced during the day which should mean only a marginal increase in the total cost of electricity. Of course, by the time methanol is being commercially produced from nuclear power plants, synthetic methanol may actually be cheaper than increasingly expensive fossil fuels.

Methanol power plants have already been demonstrated in the US in modified natural gas power plants.

Methanol back up power in small fuel cell power plants is growing in popularity in the US.

Methanol, of course, can also be converted into-- gasoline!

trag said…
As Jim questions, what precisely is wrong with having all of one's electricity eggs in the nuclear basket? It's a fine turn of phrase, but your use of it is unsupported and unsupportable.

Apply a little more thought to what you are writing Mark. If you are going to make a giant claim like that, back it up with something. How, exactly, is there any danger in having all of one's electricity come from nuclear? It's not like a fuel embargo will work.

Your assertion is unsupported and non-sensical,and one would think that it goes against the goals of your host organization.
June 25, 2013 at 12:52 PM

Anonymous said…
Maybe France has all it's eggs in the nuclear coop, but those are golden eggs and it would be foolish to kill the goose that laid them just to have a turkey dinner (or a dinner for turkeys). France has a stable and economic electricity supply, and as a result has a comparatively stable economy, unlike many of its neighbors. It has the lowest per capita electricity cost, the lowest carbon emissions and GHG production per capita. There is a reason for this, and it has to do with those golden eggs in the nuclear coop.
June 26, 2013 at 6:31 PM