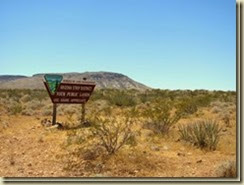 The U.S. District Court in Arizona sided with the Department of the Interior in its decision to withdraw one million acres of public land from new claims for uranium mining.

The tract of land, called the Arizona Strip, has supported uranium mining and the support structure that has grown up around it for many years. None of that is changed by the current decision, but no new mines can be opened up for the 20 years that the land is withdrawn.

The most interesting aspect of this decision is that judge ruled that the withdrawal could happen despite Interior’s recognition that it presents “a low risk of significant environmental harm.” But if mining there is not problematic, why ban additional claims? In addition, the Court was not bothered by the lack of Interior’s interest in relying on a full or even a reasonable set of facts in making its withdrawal decision.

The Court’s explanation is telling but not satisfying if you believe that the government should base its decisions on available or easily developed facts. Instead, the court seemed to elevate conservation over a common sense application of the National Environmental Policy Act’s requirements for informed decision making.

“[T]he court can find no legal principle that prevents DOI from acting in the face of uncertainty. Nor can the court conclude that the Secretary abused his discretion or acted arbitrarily, capriciously or in violation of law when he chose to err on the side of caution in protecting a national treasure - Grand Canyon National Park.

What is the point of informed decision making if the outcome is predetermined?

Importantly, the agency never attempted to disguise the uncertainty or the low probability of contamination from mining. It simply determined that even a low risk was too great given the strip’s proximity to the Grand Canyon. Never mind that all one million acres would not be in such close proximity. Some smaller tract could have been removed to accomplish that goal.

A study by the Interior Department itself found nothing to justify the land’s withdrawal.

And the economic implications of withdrawing the land are grave.

According to members of Arizona and Utah’s congressional delegations, the action would wreak economic havoc on a depressed area, breach an agreement made years ago by the federal government, and do nothing to improve or protect the environment.

“The Obama administration’s ban on uranium mining is a devastating blow to job creation in northern Arizona, particularly in Mohave County,” Sen. John McCain (R-Ariz.) said. “This decision is fueled by an emotional public relations campaign pitting the public’s love for the Grand Canyon against a modern form of low-impact mining that occurs many miles from the canyon walls and in no way impacts the quality of drinking water from the Colorado River.”

I don’t know whether The National Mining Association will appeal the decision.

The summary is simple. This is an unfortunate outcome that harms the economic profile of that area. Interior could have protected the environment in and around the Grand Canyon, which no one can dispute is extremely important, with a far less expansive withdrawal. You can read the whole decision here.

Engineer-Poet said…
This "low-impact mining"... would it be in-situ leaching?

Postulating impact on the Grand Canyon from ISLM is so far-fetched as to be ridiculous.  This has all the appearances of The Fix Being In.
October 7, 2014 at 12:42 PM