The Price Point in Japan 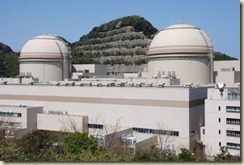 Outside Japan, it seemed inevitable:

Japan has given final approval for the restart of two nuclear reactors, a move that will end a total shutdown of the atomic power sector caused by safety fears raised by last year’s crisis at the Fukushima Daiichi plant.

Inevitable because the Prime Minister Yoshihiko Noda worked hard to get the approval of the prefecture (state) officials because all signs were that Japan would suffer brownouts and blackouts without the Oi (I’ve also seen it as Ohi) reactors in Fukui Prefecture. In any event, though the announcement is notable, it will still take awhile to get the reactors back online.

Kansai Electric said that further tests and checks were required for the two Oi reactors, but it expected to be able to start generating electricity with the No 3 unit in early July, with No 4 following later in the month. It would take each reactor a few days after being restarted to reach full output, the company said.

Which sounds like good timing. The Japanese, much like Americans, appreciate air conditioning. More seriously, Japan’s industrial sector stands to be seriously hemmed in, though the story says this particular restart is more about the air conditioning, allowing Kansai Electric to just about meet its forecast of need output for the summer.

But it’s just the beginning.

Japanese media said leading candidates [to be brought back online] would be a reactor at Shikoku Electric Power’s Ikata plant in Ehime prefecture and two units at Hokkaido Electric Power’s Tomari plant on the northern island of Hokkaido.

Japan has not yet released in energy roadmap, expected sometime this summer. But it has already taken a larger interest in renewable energy sources.

Industry Minister Yukio Edano approved the introduction of feed-in tariffs (FIT), which means higher rates will be paid for renewable energy. The move could expand revenue from renewable generation and related equipment to more than $30 billion by 2016, brokerage CLSA estimates.

Whatever happens to the nuclear reactors, it certainly isn’t a bad idea to use what resource-poor Japan has on hand. The problem is that nuclear energy is relatively (a lot) less expensive.

The scheme requires Japanese utilities to buy electricity from renewable sources such as solar, wind and geothermal at pre-set premiums for up to 20 years. Costs will be passed on to consumers through higher bills.

We can’t guess what Japan will do with its energy mix. Using nuclear, wind and solar energy in tandem and shutting down fossil fuel plants will allow Japan to lower its carbon emissions. Other combinations will not.

That doesn’t tell you anything, does it? In fact, 23.1 yen is 29 cents – not good at all. This story from World Nuclear News provides some sense of relative cost within Japan:

According to the story, the accident at Fukushima Daiichi raises that cost by, at most, another two cents per kWh. That makes coal and natural gas more competitive, but not renewable energy sources – wind energy not at all – certainly not with those subsides in place.

Joffan said…
Ohi's phase-1 safety review was approved ages ago. Is there an online source for the approval status of the other Japanese reactors?
June 18, 2012 at 5:42 PM

jimwg said…
Japan almost religiously prides its scenic treasures, so I wonder how they're going to wrap themselves around windmills razing forests and mountainsides for noisy intermittent power. Vermont, take note!