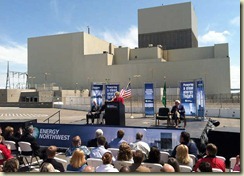 Nine U.S. congressional leaders from Washington state penned a letter to U.S. Energy Secretary Steven Chu this week to urge the federal agency to consider the state as a possible location for small nuclear reactors. The letter, signed by both of the state’s U.S. senators and seven U.S. representatives, comes only weeks after Washington Gov. Chris Gregoire (D) submitted a similar letter to the energy secretary, further signaling that the state’s lawmakers are serious about wanting a stake in the upcoming public-private partnership to develop up to two small reactors in this country.
The lawmakers said in the letter that the U.S. Department of Energy’s Hanford site, a facility used mainly during World War II to create plutonium for America’s defense program, could make a perfect location to develop a small reactor since it could boost the environmental cleanup efforts at the site and create jobs. The Tri-City Herald quotes from the letter:


A small modular reactor in the Tri-Cities could help offset the loss of jobs as Hanford environmental cleanup progresses, according to the letter from the congressional delegation.

"Under current regulations, economic development consideration should be given to weapons complex communities experiencing a downturn in federal employment," the letter said.

Other local leaders have said that a 70-megawatt small reactor could be used to supply the Hanford site’s vitrification plant, a waste treatment facility that converts nuclear waste products into a glass or a glassy substance so that it can be safely stored in a repository. A 30-megawatt small reactor could also be used to help power DOE’s Pacific Northwest National Laboratory, located in Richland, Wash.
The congressional leaders in the letter also emphasized that the Tri-Cities is home to the Pacific Northwest’s only nuclear energy facility, the Columbia Generating Station, which originally had planned for two more full-scale nuclear reactors to be located at the site. The Tri-City Herald reports:


The infrastructure developed for those reactors could be used for the construction of new small modular reactors, the letter said.


"The site is leased land located squarely within DOE's Hanford Site, which would also prove of benefit to the department in moving this new technology forward," the letter said.

Not only does the Evergreen state have a few locations that could benefit from small reactors, but developing the technology in the state could bring opportunities for U.S. exports, a key point that the governor made in her letter a few weeks ago.


"Small modular reactors, once developed, become a very exportable product that can be of great benefit to China, Korea, Japan and to developing countries around the world," she said. "Hanford and the Tri-Cities could be a keystone to such manufacturing with direct access to ocean-going barges, major interstate highways and railroads."

The Pacific Northwest state has a supportive community, a knowledgeable work force and suitable sites already vetted for nuclear production, said the Tri-City Herald in an editorial yesterday. Given the many benefits this new technology could bring to the United States, DOE should work swiftly and with a sense of urgency over the next few months in making its decision. The editorial continues:


Nothing else on the horizon has the potential to reduce the amount of carbon released into the atmosphere by the extent that the scientific community says is needed to halt global warming -- or to meet the world's growing demand for energy.


It's crucial to put any modular reactor on the best possible path for success.

The letter submitted this week to Secretary Chu was signed by members of both political parties, including: Democratic Sens. Patty Murray and Maria Cantwell; Republican Reps. Doc Hastings, Cathy McMorris Rodgers, Dave Reichert, and Jaime Herrera Beutler; and Democratic Reps. Norm Dicks, Adam Smith and Rick Larsen.
To read more in small reactor news, see my blog post from earlier this week that highlights a couple of other states that have come forward in announcing their interest in developing this new technology.
Photo: Washington Gov. Chris Gregoire speaks at the Columbia Generating Station in celebration of the plant’s recently renewed license extension to operate until 2043. (Photo credits: Richard Dickin at the Tri-City Herald.) 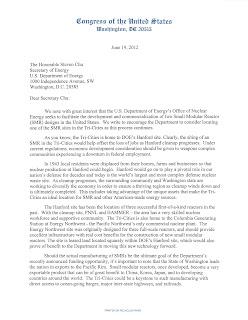 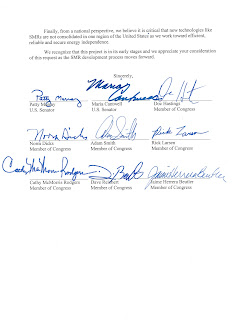 Anonymous said…
There is a more detailed report about these efforts, as well as similar activities, in South Carolina and Missouri, at Cool Hand Nuke online now
June 22, 2012 at 10:05 AM

Unknown said…
http://theorderoftheironphoenix.com/wp/the-disadvantages-of-using-nuclear-technology/
This really truly reminds me of why we shouldn't build atomic power plants in the nation's capitol.
June 23, 2012 at 12:13 PM