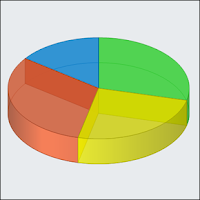 The Wall Street Journal's excellent blog, Environmental Capital, takes a look at the federal energy subsidy pie and asks, Who's getting what?

Since 1999, federal energy subsidies have more than doubled—from $8.2 billion to $16.6 billion in 2007. Who gets the most? “Renewables” landed $4.8 billion last year, but that includes $3.25 billion for ethanol and other biofuels. Coal and cleaner-burning “refined” coal took home $3.3 billion, while the nuclear power industry got $1.3 billion. In all, about 40% of the energy subsidy pie went toward electricity production; the rest for things like alternative fuels and energy conservation.

...But the raw numbers don’t tell the story. What does is how much cash the government hands out per unit of electricity produced. The winner there is refined coal, at $29.81 per megawatt hour. That’s even more than solar power ($24.34) or wind ($23.37). Nuclear power received $1.59 per megawatt hour. Regular coal took home $0.44 per megawatt hour, while the least-subsidized of power fuels was natural gas, which got just a $0.25 boost per megawatt hour.

Lisa Stiles said…
Be sure to stop by the WSJ's blog and join the debate going on in the Comments section. Some stalwarts from NIRS and Public Citizen are posting links to plenty of misinformation.

Anonymous said…
I'm a bit confused as to the units used in calculating relative subsidies.

After all, the average wholesale price of electricity is about $50 per megawatt-hour.

I don't think subsidies are the complete picture. You can't discuss subsidies received without discussing taxes paid, or (unpaid) externalities for that matter. A more accurate measure might be:

I'd love to see this metric tabulated for the various electricity sources. Nuclear should compare favorably. It is taxed heavily, especially at the local level, and pays for its own externalities (waste disposal) or pays to prevent any externalities (engineered safeguards, containment). The denominator is huge, of course.
April 28, 2008 at 9:30 PM

Anonymous said…
I double-checked and the units are correct - nuclear gets about a 3% subsidy on a per-kilowatt or per-megawatt basis at wholesale. I used the EIA database of gross nuclear production.

That's assuming the dollar amount of the subsidy is correct.

Of course, one needs to subtract the nuclear waste trust fund fees that are collected but not spent as this money goes into the Treasury. That is a bit less than $1 per MW-hr.

That would knock the actual taxpayer net subsidy down to about 50 cents per MW-hr or 1% of wholesale price.

robert said…
Actually, according to this report, a report that you actually linked to, the numbers you have posted here are grossly inaccurate.

When you are putting misinformation out, be careful not to supply the proof that you are not being honest, because someone might actually check your facts.