"A Sad Story for Climate Change" 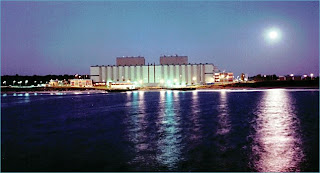 This is from the sub-only Climate Wire:

"I think CO2 emissions will increase tremendously in the next decades because more and more countries will use more coal like Germany. And that's a sad story [for] climate change," she said.


She is Claudia Kemfert, an energy economist at the German Institute of Economic Research in Berlin, so she knows her lumps of coal from lumps of uranium.
Another germane quote:

"We lack the necessary power lines to transmit wind-generated electricity from the north," said Johannes Teyssen, CEO of energy company E.ON. "This could lead to massive problems in the grid, even power outages."

Just gets better and better in Germany, doesn't it?
---
Meanwhile:

The Point Beach nuclear plant will be allowed to expand its power output by 17% this year, the Nuclear Regulatory Commission announced Tuesday.

Point Beach is in Wisconsin.

Or a bunch of hybrid cars.
The environmentalist in this story, Katie Nekola of Clean Wisconsin, tries a novel approach.

"It makes no sense that NRC rushed to approve the Point Beach expansion before completing their Fukushima safety review, especially when Wisconsin doesn't need the power,"

Odd argument, as environmentalist are usually pretty concerned about the future - and it's hard to deny we'll need more electricity generation sooner rather than later. Getting ready for it scarcely seems a bad idea.
Maybe Germany would like some of it in the meantime (if that were possible, of course.)
---
And:

Read the whole thing for more. This is about Vogtle (in Georgia) and Virgil C. Summer (in South Carolina).  I was a little puzzled by the timing of this report, but it seems recent enough to take account of Japan and the NRC's subsequent safety review:

The "primary challenge" for the utilities will likely be any design changes mandated by the US Nuclear Regulatory Commission following a review of lessons learned from Fukushima, S&P said.

SteveK9 said…
I think Germany may prove to be rather unique. And, of course they may end up buying a lot of their electricity from France (nuclear). That may hurt German competitiveness, but at least it isn't coal. When Germany brags about their wind turbines people should just keep putting up the numbers on the total contribution to German energy use from wind, coal, gas, etc. Germany is not green.
May 4, 2011 at 8:47 PM