Good News from Iowa and India 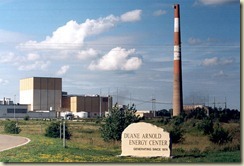 
A bill allowing MidAmerican Energy to seek permission from regulators to move forward with a nuclear power plant passed a Senate committee Tuesday night.
The panel approved the measure 8 to 7. It would allow MidAmerican to ask the Iowa Utilities Board for a rate increase from the company’s customers to fund the cost of permitting, licensing, and building a plant. Costs for such a project have been estimated at $2 billion.

This is good news, a move that, if it continues apace through the legislative process, will solve some notable problems with the Iowa energy mix.


He [state Sen. Matt McCoy(D)], said Iowa could lose as much as 40 percent of its electricity generation from coal plants in the coming years and the only other option would be to build natural gas plants, which he said would not offer stable future prices.

It’s a reasonable environmental choice. I’d be surprised, though, if MidAmerican isn’t looking at natural gas to spell some of those coal plants. That’s been happening in other states.
We did a post on this subject a few entries down. Still a lot more hurdles to clear. More to come on this.
---
We’ve looked at the protests involving India’s Kudankulam facility that involved some rock throwing by some pro-plant political figures. Not cool – also not necessary.


The agitation against the Kudankulam nuclear power plant has fizzled out as the Tamil Nadu government gave the green signal for the commissioning of the first unit of the 2X1000 MW power plant.

Especially because it will provide considerable relief in Tamil Nadu:


Tamil Nadu is under the grip of a severe power crisis with a peak hour deficit of 4000 MW. The government has declared a power holiday for industrial units.

This would outstrip any effort to set up windmills – to solve, it requires a full scale energy facility, be it coal, natural gas or nuclear. The most responsible choice in a rapidly developing nation isn’t tough to make.


Other than Chennai, all districts undergo load shedding ranging from six to eight hours a day. The capital city itself goes without power for two hours daily.

Not a tough decision at all.
There is some more information about the protests, but nothing about the rock throwing. In any event, this is a good outcome.
---
Sometimes, when one reads about the knock-on effect on employment from the building or collapse of an industrial sector, one might reasonably suspect the books are getting cooked.
The argument that industrial collapse has a reach beyond the immediately effected companies was especially prevalent during the car company rescue in 2007-2008, where it was a frequent talking point that losing the automobile manufacturing industry would also have a dire effect on a untold number of companies that service the industry.
The Center for Automotive Research (yes, its acronym is CAR), put it this way:


Should all of the Detroit Three’s U.S. operations cease in 2009, the first year total employment impact would be a loss of nearly 3.0 million jobs in the U.S. economy—comprised of 239,341 jobs at the Detroit Three, 973,969 indirect/supplier jobs and over 1.7 million spin-off (expenditure-induced) jobs.

Well, it’s true enough – though you cannot pin down numbers as precisely you might like – CAR’s study points out that international auto makers would move some its operations to the U.S., mitigating some of the employment impact - but true enough.
And it works the other way. Consider:

Let’s leave the oil sands to the side. Westinghouse placed these orders and it’s not for nuclear facilities in China.


James R. Lines, Graham’s President and Chief Executive Officer, commented, “… We consider the orders awarded to us over the last two quarters for the new nuclear energy facilities under construction in the Southeastern United States to be an affirmation both of our reputation for consistently delivering high quality products as well as our exceptional customer service.

And consider that the two Westinghouse reactors at the V.C. Summer facility are in the hopper waiting for final NRC approval. No word from Graham on what this means for employment there, but we may assume it means something positive.
Congratulations to Graham in this instance, but congratulations to a reviving U.S. nuclear support industry especially.
Graham’s homepage is here.
Iowa’s Duane Arnold Energy Center.