By Eric McErlain August 23, 2006
I've got a follow-on comment to Lisa's post below about the performance put on by some of the anti-nukes who showed up at the NRC public meeting on North Anna held last week in Louisa County.

While Lisa pointed out some of the contradictions evident in the statement of the representative of Public Citizen, I'll take a look at some of the half-truths spouted by Lou Zeller of the Blue Ridge Environmental Defense League.

The first thing he said that caught my attention was the claim that a 2003 MIT study on nuclear energy concluded that it couldn't be economically competitive with other sources of electric generation like natural gas. Indeed, that's exactly what the study concluded. However, what Zeller failed to mention was the fact that the price of natural gas today is about triple the price estimate of natural gas used in the study.

Let's just say that a price increase of that magnitude renders the original conclusion, "inoperative".

Later, Zeller said that contrary to claims of pro-nuclear advocates, that switching to uranium would not lessen America's dependence on foreign sources of fuel. After all, 80% of the world's uranium can be found outside the United States.

Again, a statement that is true on its face. Then again, what pro-nuclear advocates really say is that nuclear energy supports American energy security because unlike oil or natural gas, the vast majority of the world's uranium reserves are found in Australia and Canada -- two of America's strongest allies and paragons of political stability.

But what we have the biggest problem with concerns a number of studies that BREDL has been publicizing that claim that death rates in the immediate area around North Anna have increased dramatically since the opening of the plant. Our friend Delbert Horn took a closer look at that charge, and discovered that the numbers weren't all they were cracked up to be. The note Delbert sent me today is excerpted below:

In October 2004, Lou Zeller, on the Blue Ridge Environmental website, cited a Joseph Mangano study which claimed the death rate for children almost doubled in the NINE counties closest to North Anna. The study examines causes of death in a 30-mile radius from the plant. 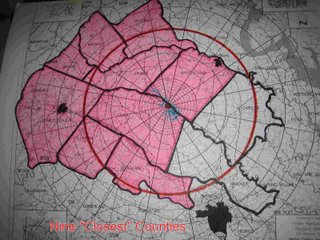 This first map shows the nine counties in pink and the 30-mile radius for the study. Note that Caroline and Hanover counties to the East and Southeast were not included, even though they'’re within 10 miles of the plant. Greene County to the West was included, although it'’s completely outside the 30-mile radius. The black dot to the West is the city of Charlottesville. It was included, but is also outside the 30-mile radius. The much larger city of Richmond is the same distance from the plant as Charlottesville, but was excluded, as was the city of Fredericksburg, which is only 25 miles Northeast of the plant.

Five months later, in March 2005, Mr. Zeller, in written comments to the NRC cited yet another flawed study.

On page one of his comments, he claims the women'’s death rates from breast cancer increased 73% in the TEN counties nearest the plants. If you thought this study added Caroline or Hanover in as the tenth county, you'd be wrong! 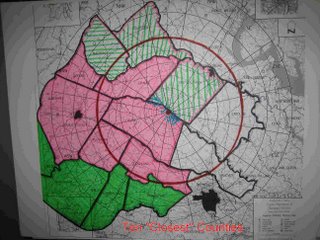 This second map below shows the differences in green. On page five of his comments, Mr. Zeller lists the counties included. This second study ignored Madison and Culpeper counties to the Northwest, but added Nelson, Buckingham, Cumberland and Powhatan Counties to the Southwest. Nelson County is 50 miles from North Anna, yet this study also ignored Caroline and Hanover Counties 10 miles away. Strangest of all, this study ignored Spotsylvania County, which is right across Lake Anna from the plant!

Spotsylvania has a larger population than ANY of the 10 counties they included in this study. Does hand-picking counties and cities like this bias the results? You bet it does! This is what JUNK SCIENCE looks like. Consider the incredible irony that the BREDL stationary includes the North Carolina State Motto at the bottom of the page: "“Esse quam videre."” Translation: "“To be rather than to seem."”

Lisa Stiles said…
Better watch out, Eric. Lou might accuse you of slander, too! It's been a week now since he said at the DEQ hearing that he would respond to Delbert's statements "at the appropriate time." I wonder what BREDL is waiting for...
August 23, 2006 at 4:18 PM

Rod Adams said…
It is kind of interesting that the counted counties, with their negative health statistics are generally to the west of the plant, which is up wind. If I am not mistaken, one of the major employers in at least some of the counties studied is coal mining.
August 23, 2006 at 8:37 PM

Anonymous said…
The method is used to get a city or two into the so-called study. The cities chosen are cities that have statistical health changes due to unrelated causation. Most people are not familiar with the areas discussed, so the method generally works.
August 24, 2006 at 11:43 AM

Whitehall said…
That is one great line:

Jim Hopf said…
More to the point is that fact that we already know, beyond a shadow of a doubt, that plant radiation is not having any effect, even before we do any such epidemiological study.

Radiation is easy to accurately measure, and extensive monitoring is routinely performed all around the area of the plant. We know (with confidence) that nobody is being exposed to more than ~1 mrem/year. We also know that annual exposures of ~1000 mrem or less have no measurable health effect, due to teh lack of correlation between cancer rates and natural background radiation exposure (which varies widely). If hundreds of extra mrem have no measurable effect, we KNOW that less than ~1 mrem has no effect!

Any effects seen by "studies" such as this one are clearly due to random statistical artifacts and/or someone cooking the data. We know that before even looking at the study, because the claim that radiation is having a significant health effect is simply known to be impossible. In the very unlikely event that there really is some real effect, it's clearly due to some agent other than radiation.
August 24, 2006 at 9:48 PM

Anonymous said…
Conversion confusion...
just to clarify are we talking about 10 micro Sievert per year here?

If the conversion tables are correct that would be just 1/100 of the background radiation (If you take 1 milli Sievert per year as a standard)...
It seems to be more important for the mSv count if you live in a concrete building than if you live next to a NPP.
August 25, 2006 at 12:25 AM

Radiation Plume Maps said…
Two issues in general. Background radiation implies some natural source of radiation, while there is a little most of "background" these days is actually man made radioactive pollution.

Second wind speed and direction is probably the single most climate issue affecting plume behavior. There is much more, but I wouldn't expect nuclear apologists to make those distinctions.
January 26, 2014 at 1:34 PM