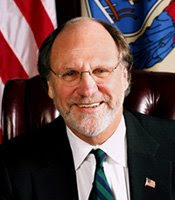 Jon Corzine [D], current Governor of New Jersey and former U.S. Senator, appeared earlier today on CNN's American Morning. The interviewer was John Roberts (no, not that one) and the transcript/video can be seen here. The pull quote:

Roberts: On that subject of nuclear energy, would you be prepared to see more nuclear plants built in the garden state?

Corzine: Well, we actually have an energy master plan where we're working on the safety and security and the storage of waste. If we can come to positive conclusion on that, I absolutely would. We already get about 50% of our energy from nuclear power here in the state. We have four plants. They're aging and we're going to have to think about whether we want to renew that. I'm not arguing that's the only step. We need to be in wind, solar, biofuel, all of those other areas. And Senator Obama is talking about spending $150 billion in the next ten years in those kind of production activities coming from a cap and trade program. [It's a] very strong program. [It] will work and get us off this addiction on oil.