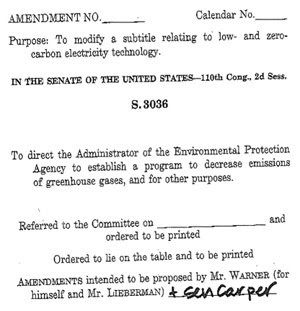 As the IT folks in Senator Warner's office are undoubtedly really busy, below is a transcription of a draft of the Warner amendment. According to Sen. Warner, his proposed amendment will be the first one to be offered up, and will likely be introduced Wednesday morning.

Purpose: To modify a subtitle relating to low- and zero- carbon electricity technology.

To direct the Administrator of the Environmental Protection Agency to establish a program to decrease emissions of greenhouse gases, and for other purposes.

AMENDMENTS intended to be proposed by Mr. Warner (for himself and Mr. Lieberman) + Sen. Carper [D-DEL].

Viz:
On page 164, strike line 15 and insert the following:
(c) EDUCATION AND TRAINING - For each

Beginning on page 181, strike line 1 and all that follows through page 183, line 3, and insert the following:
SEC. 536 EDUCATION AND TRAINING

(b) Nuclear Science and Engineering Education -- For each applicable period, the Secretary of Energy shall use 1/3 of the amounts made available under section 534 (c) for the calendar years in the applicable period to increase the number and amounts of nuclear science talent expansion grants and nuclear science competitiveness grants provided under section 5004 of the America COMPETES Act (42 U.S.C. 16532).

(d) Climate Change Science And Policy Education -- For each applicable period, the Secretary of Education shall use 1/3 of the amounts made available under section 534 (c) for the calendar years in the applicable period to support climate change policy and science education in the United States.

(b) Sense of Senate Regarding Use of Funds -- It is the Sense of the Senate that Congres should stimulate private sector investment in the manufacturing if nuclear project components in the United States, including through the financial incentives program established under this subtitle.

SEC. 902 DEFINITIONS
On page 293, line 14, insert: (D) establishing procedures, programs, and facilities to achieve ASME certification standards
On page 294, strike line 10 and insert the following:
or low carbon generation, including --
(A) a technology referred to in section
832(a); and
(B) nuclear power technology