A Baby Step for Small Reactors in Indiana 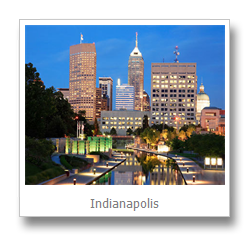 One of the benefits of small reactors is that they will (in all likelihood) cost less than full scale reactors. The admittedly enormous price of a new plant can be offset by their relatively low running costs, so new ones can be built – as in Georgia and South Carolina – but small reactors can be envisioned in places and by utilities that have shied away from nuclear energy due to cost – and maybe also a sense of overkill in less populous areas. At least, that’s a thought to turn over, but there hasn’t been that much evidence of it even as small reactors enter their prototyping and licensing phases.

Indiana hasn't tried to build a nuclear power plant since two efforts fizzled in the 1980s over high costs, nearly bankrupting one of the companies in the process.

But an influential state senator says it's time to encourage nuclear power again and has introduced a bill that would provide financial incentives to utilities to build nuclear plants.

As a picture in the Indianapolis Star story shows, the state is surrounded by states that do have nuclear facilities – including Michigan, Illinois and Ohio, with a couple right at the border – so Indiana probably already gets some of its electricity from nuclear energy.

His (state Senator Jim Merritt’s) bill, Senate Bill 302, would allow utilities to build a nuclear plant, or a small modular reactor, and pass along the construction costs to customers years before the plant goes into operation.

Merritt admits that utilities have not asked for this – so who knows if they want one – but it gives small reactors a bit of a boost and begins showing the result of their percolation. This’ll be interesting to track in the coming months – I reckon there’ll be more states taking an interest in small reactors and with them, nuclear energy.