“A dependable and clean energy”–India PM on Nuclear Energy 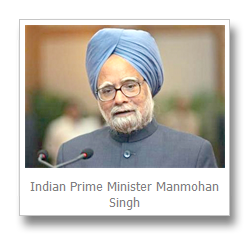 In our year end wrap up, we more-or-less ignored international doings to stick with the domestic industry. That makes sense given NEI’s interests, but it does undersell the larger context of nuclear energy’s value. We can argue about the costs of building new facilities or the impact of natural gas all we want – and they’re important issues – but for much of the rest of the world, such as India, the reaction is a big “meh.”

Prime Minister Manmohan Singh on Friday strongly advocated nuclear power as a 'viable and clean option' for emerging India's growing energy needs. Addressing a gathering at Jassaur Kheri village of Jhajjar district after laying foundation stones of four projects, including Global Centre for Nuclear Energy and Nation Cancer Institute, Singh said the country was aiming to generate more than 27,000 MW of nuclear power in the next 10 years.

The juxtaposition of nuclear energy and cancer is awkward, but both centers are certainly excellent undertakings and employment and economic boons for Jassaur Kheri. Singh really isn’t mincing words here:

"Nuclear energy is a dependable and clean option to produce power. India is among the very few nations which have developed technology to install nuclear power plants and have achieved the capability to make nuclear fuel. Our aim is that in the coming ten years, we should achieve the capability to generate more than 27,000 MW of nuclear power," Singh stated during the occasion.

All this is gratifying to hear, but about what you’d expect at a groundbreaking – Singh says similar nice things about the cancer center – but why is he so pleased? That really is the crux of it.

The Prime Minister said as the country's population grows and more urbanization happens, the demand for power will also go up. Ensuring that there was enough power for our growing economy was the need of the hour, and while there were various sources like coal, hydro, wind, gas to generate power, nuclear energy was a viable and clean alternative, he said.

“A viable and clean alterative – the demand for power – population grows – urbanization.” These are the values. I’d throw in industrialization, too, but Singh has it exactly right.

So what is the Global Centre for Nuclear Energy?

The Center will have five schools for research into advanced nuclear technology, training and education, international seminars, and courses. Subject areas will include nuclear energy systems, radiological safety, applications of radioisotopes and radiation technologies, and nuclear security. India hopes to attract foreign visiting nuclear experts for international seminars, and is working with the UN's International Atomic Energy Agency and Russia, in that regard.

Why Russia and not the U.S.? Well, the article explains that U.S. has bridled on an Indian decision to hold vendors rather than operators responsible for an accident. This doesn’t apply to Russia because its industry is state owned. I’m fairly sure Russia wouldn’t enjoy this proviso either, so I don’t think that’s it. Easier to conclude: why not Russia? It’s certainly a big nuclear player in its own right.

This story explains the India-U.S. kerfluffle in more detail. It discusses the liability issue and also growing differences about the way the U.S. is dealing with South Asia – notably India’s neighbors Pakistan and Afghanistan. This gets into the murkier realms of diplomacy that supersedes trade agreements, but still, let’s stick with: Why not Russia?

Anonymous said…
"Why Russia not the U.S.?"
Really the answer is easy. There is no American company that could sell India a reactor. Remember that Westinghouse is a Japanese company now.
January 6, 2014 at 5:42 PM

Anonymous said…
Hi..
Nuclear energy is an option for clean, reliable energy. India is among the few countries that has developed a technology for the installation of nuclear plants and have achieved the ability to manufacture nuclear fuel. Our goal is that in the next ten years we achieving the capability to produce more than 27,000 MW of nuclear power, "said Singh on the occasion.Exel generator