A Glass of Wine with Your Thorium 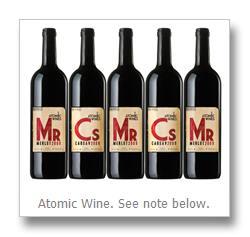 This is minor beans no matter how you position it, but amusing anyway:

I couldn’t find anything at the Thorium Core site to explain the name, so I assume the brains behind it wanted to play off ReactOS and reaction, as in nuclear reaction. That’s obvious enough. It also speaks to the sheer coolness of the word thorium over uranium, though Uranium Core doesn’t sound that bad to me. Maybe the relative unfamiliarity of thorium makes its use for an operating system less ambiguous.
If you follow the open source world, you know that groups of hackers will get together to do whatever can be done, however unlikely. Whether a thing should be done is a different issue, but the creative zeal can lead to interesting outcomes. In this case, a decades-long project called Wine (which reproduces Microsoft Windows libraries from scratch so that programs intended to run only on Windows can also run on, say, the Mac or Linux/Unix) spawned ReactOS (which  reproduces the Windows desktop and ability to interface with devices to run programs through Wine; that is, it’s an operating system heavily dependent on Wine) spawned Thorium Core (ReactOS in a browser). Look up the word convoluted in the dictionary and this is what you’ll find.
The original idea behind Wine was to get the benefit of Windows programs without paying Microsoft a license fee for Windows. Now, I guess, the Thorium Core group would like that license fee (There are commercial Wine derivatives, too).
But it’s all in fun and can be practical. If you want to focus on the fun side, run Thorium Core in a browser in an emulated Linux environment on a Windows host. Warning: may lead to madness.
---
We probably owe thorium advocates a serious post after this diversion. In the meantime, visit Kirk Sorenson’s invaluable Energy from Thorium site for good reading. And watching – lots of interesting videos on the home page.
---
About the picture:


In a secret research laboratory in California, our team of scientists went to work combining nuclear technology and pure awesomeness in order to create the missing elements all wines should have. We split atoms, we combined genomics, restructured nuclear elements, and then finally we poured legendary sauce all over everything. We created our very own experimental, Atomic Wine.

Not sure if NEI has this in a fridge somewhere, but it’s made to order, isn’t it?
It’s an art project by Jonathan Chin, not an actual product – unfortunately. Still, very nicely done.