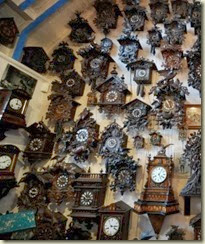 Switzerland will always be immortalized by a famous speech written by Graham Greene* and spoken by Orson Welles’ Harry Lime in the movie The Third Man:

In Italy for 30 years under the Borgias they had warfare, terror, murder, and bloodshed, but they produced Michelangelo, Leonardo da Vinci, and the Renaissance. In Switzerland they had brotherly love - they had 500 years of democracy and peace, and what did that produce? The cuckoo clock.

Remember that this is spoken by a deeply cynical villain - it’s a pretty cynical view of world history – and one can allow the capper of the cuckoo clock despite it not being created in Switzerland but Bavaria. You get the point.

But just because Harry Lime didn’t believe in anything doesn’t mean the Swiss don’t. The government there announced at about the same time that Germany did, in 2011 after the Fukushima Daiichi accident, that it would close its five reactors. Germany was responding to strong public opinion, but the Swiss did not wait to gauge attitudes, assuming that this was a desired outcome. But it might not be:

Some 64% of respondents said that they considered Switzerland's five existing reactors essential in meeting the country's electricity demand. This is around the average level reported since the first poll in 2001, but marks a 3% increase from 2012.

This is a Datascope poll conducted for the Swiss version of NEI (actually, more like the nuclear segment of the Edison Electric Institute), called, naturally enough, swissnuclear, so consider that when reading these numbers. Just because the poll comes from an interested party doesn’t automatically disqualify it and the Swiss people have generally favored nuclear energy.

The results of the poll suggest that Switzerland's phase out policy is not fully supported by the Swiss people. Some 73% want Switzerland to be able to produce all of its electricity (75% in 2012), while 78% do not want federal policies to lead to Switzerland being more dependent on other countries. Some 88% of respondents said that the country's energy transition must not endanger its security of supply, up from 84% in previous year.

The Swiss love referenda, so this will probably come to a vote at some point – two earlier votes to close nuclear plants, in 1990 and 2003, failed. And the plants are not scheduled to close until 2035, so there’s plenty of time to reverse a hasty decision. I’m not sure I’d put money on a German reversal – whatever might seem the smart thing to do – but I might on the Swiss. Heads are already cooling there.

* Welles may have written the cuckoo clock speech himself – I’m not sure that old dispute has been cleared up. It says something about its potency that it has multiple claimants.

Joffan said…
"The results of the poll suggest that Switzerland's phase out policy is not fully supported by the Swiss people."

Well, no, that is sufficiently understated to be called false. The results of the poll are that the Swiss government's phase-out announcement went directly against the will of the people.
January 28, 2014 at 4:29 PM