No Nuclear Pork at the Trough 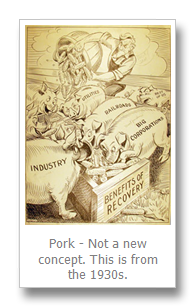 The New York Times takes a look at the, well, pork in the omnibus budget bill being fast tracked through Congress. (This legislation will set budget priorities and fund government operations through October, the end of fiscal year 2014.) Read the whole thing, of course, but here’s the relevant part for us, which kicks off the article:

A cryptic reference turns up on Page 399 of a six-inch-thick piece of legislation that congressional appropriators unveiled Monday night, calling for an extra $155 million worth of financing for the Department of Energy to promote its nuclear projects.

This is the same program — helping for-profit companies build a new generation of small nuclear reactors — that has been called a boondoggle by some spending watchdog groups. But lawmakers, including Senator Lamar Alexander, Republican of Tennessee, pressed by industry lobbyists, opted to increase the program’s budget by 21 percent above the Obama administration’s request.

“I’m very pleased with that development,” said Mr. Alexander, adding that he met with one of the main beneficiaries, the Babcock & Wilcox Company, two months ago and was assured that the program was “on schedule and on budget.” The first two nuclear reactors are being built in Oak Ridge, Tenn. — 30 minutes from the senator’s hometown.

The extra money for nuclear programs is a hint of the kind of deal-making in the 1,582-page spending bill, which leaders in both parties are urging their members to quickly pass into law to avoid another government shutdown. The House is expected to do so on Wednesday.

DOE’s small reactor program is a public-private partnership and bolsters the government’s interests in infrastructure, creating jobs, advancing international trade and, incidentally, ensuring that the reactors meet regulatory standards – in the case of NuScale, ensuring that the NRC’s regulations can accommodate the ideas behind the reactor. (B&W is modeled after full scale light water reactors and is an easier regulatory lift, at least theoretically.) In the case of B&W, the project involves other government entities including the Oak Ridge National Labs and the Tennessee Valley Authority. That Sen. Alexander is a regular cash register.

(Note, too, that Sen. Alexander is only “pressed by industry lobbyists,” not environmental lobbyists, and that watchdog groups calling the small reactor program a boondoggle have no influence whatever. Why? Because the industry lobbyists doing the pressing are wicked, driven by greed, and not pure, driven by altruism. Only the money hungry serpents “press.” This is a very naïve construction by the Times.)

Yes, it can all make you a little peevish.

Now, we will note that Taxpayers for Common Sense, an anti-pork group, really don’t like the small reactor program and the Times has picked up its view for the article. To be honest, the program doesn’t really need that much defending, but there is the issue of pork.

The budget legislation is awash in promoting and discouraging different policy priorities that must seem baffling to the average observer.

Lawmakers are again boasting about bringing home the bacon, whether it is Senator Patty Murray, Democrat of Washington, bragging on Tuesday about the new KC-46A refueling plane and P-8A Poseidon military aircraft to be built by Boeing in her state, or the three House Democrats from California taking credit for money they won to expand a border crossing near San Diego.

The Times doesn’t note if these are good or bad things to fund, though I guess we can assume it thinks them bad. If Sen. Murray is crowing in an unseemly way, her opponent in the next election might well mention it, so there’s that. Interestingly, the 2014 budget is lower than the 2013 budget and should bring down the deficit (if not necessarily the national debt). Pork is often seen as wasteful spending, but is it when it’s not wasteful? Might Sen. Murray have done her state some good in bringing in jobs for a worthy project, if indeed she did? Not sure – the article doesn’t care about any of that.

The idea of pork can be pretty ambiguous withal, useful for demagoguing disliked programs, sometimes exposing genuine waste – but even some of the examples used to demonstrate waste can be shown as pretty useful when fully explained – remember volcano monitoring? - so we have to allow a certain number of sloppy pig calls. If you don’t like a program, it’s pork. The small reactor program ($150 million in a $1.1 trillion budget) doesn’t cost cracklings, but it isn’t blasting a hole in the budget either and has the potential to do much good for a much wider group than composes the nuclear energy industry.

I realize it’s a highly arguable point – and I can’t deny that the perception of politicians as willing to trade votes for questionable or silly projects has considerable truth behind it - but it does strike me that labeling what one doesn’t like as pork is a convenient way to divert attention away from serious policy matters to legislative trivia. If someone can definitively define pork and show that it can be banned without impeding progress or squashing valuable programs, then let’s talk. Otherwise, it’s just an excuse for the New York Times to take a shabby bash at nuclear energy when no facts actually weigh into its dislike of the small reactor program.

We’ll take a fuller look at the nuclear portions of the omnibus bill when it gets through Congress – which should be pretty imminent. Nuclear energy came through the sausage making process pretty well even without pork.

Marcel F. Williams said…
The money going into small reactor and thorium reactor R&D is very exciting. This program has the long term potential of ending America's dependence on fossil fuels while also solving the problem of spent fuel by simply recycling the material in uranium and thorium reactors.