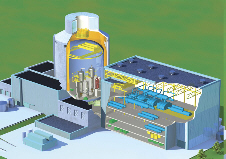 U.S.-based Westinghouse Electric Co. LLC has won a two-year battle for a multibillion-dollar nuclear power deal with China, edging out French and Russian rivals to secure a contract that may help Beijing smooth ties with Washington.

The deal, estimated in the past at about $8-billion (U.S.), should warm relations between the world's top two energy consumers, who have clashed lately over a range of issues from the yuan currency to the Chinese bid for U.S. independent oil firm Unocal Corp.

It will also reaffirm China -- now a laggard in the nuclear sector -- at the forefront of a global trend toward increased use of atomic power, touted by many nations as the cleanest, cheapest solution to the world's strained energy industry.

From the DOE press release:

"This is an exciting day for the U.S. nuclear industry. This agreement is good for the people of China and good for the people of the United States. It is an example that if we work together, we can advance not only our trade relations, but also our common goal of energy security," Secretary Bodman said. "This DOE-supported, Generation 3+ reactor is safer and more efficient than current reactors and could help spur development of a nuclear renaissance in the U.S."”

"Westinghouse is certainly pleased that China has selected the AP1000, the very same advanced plant design that is the technology of choice for most of the new plant programs announced to date in the United States," said Steve Tritch, Westinghouse President and CEO. "We now look forward to working with our Chinese customer to negotiate final contract details so that we can formally implement this forward-looking new build program."

Mr. Tritch also said that Westinghouse, a group company of Toshiba Corporation, will work with SNPTC to forge a long-term relationship that will be in the best interests of all parties, including the citizens and governments of the Peoples Republic of China and the United States.

Westinghouse, with the world's largest installed base of operating nuclear power plants, said the selection of the AP1000 would create or sustain 5,000 well-paying design, engineering and manufacturing jobs throughout the United States.

These jobs will help to load Westinghouse design and manufacturing facilities in Pennsylvania, New England, South Carolina and Utah. Additional jobs will be created at U.S.-based suppliers in at least 20 states, including at major architectural, design and construction organizations. Included are projected jobs in Massachusetts, New Jersey, North Carolina, and Louisiana for Shaw.

UPDATE: An interesting observation from the folks at Hit and Run.