Data plots showing the status of the Fukushima Daiichi units

A new blog was created several days ago just to show the parameters of FD units 1-3 based on the data that Japan’s Nuclear and Industrial Safety Agency releases every day. The gentleman who’s running the blog, dgr4quake, is taking the data and creating meaningful charts to show what’s going on with each unit.

For instance, the chart below shows the continued increase in pressure in unit 1’s reactor pressure vessel over the past two and a half weeks. The other two RPVs have been flat and stable. The RPV pressure indicator shows an accumulation of gas in the core (likely including hydrogen). Nitrogen is currently being injected in the core so it can reduce the chance of fires or explosions from the hydrogen. According to his notes, the RPV normal operating pressure is 7MPa and maximum design pressure is 8.7 MPa. Right now unit 1 RPV pressure is almost 0.9MPa so the reactor can withstand the pressure increase for awhile. 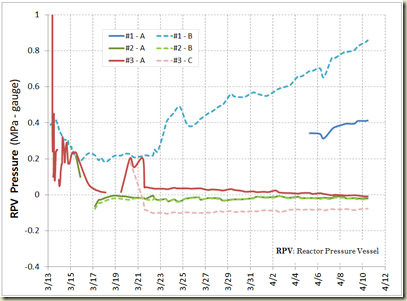 There are a number of other telling charts at the blog, those include data on the pressure containment vessels, drywells, and core water levels (copied below). 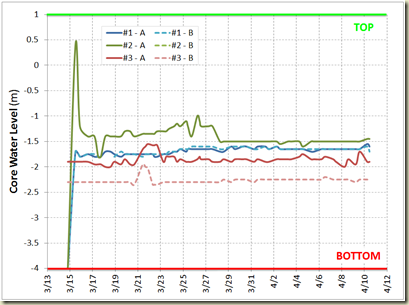 As shown in the chart, about half of the fuel in all three units has been uncovered with water since the beginning of the accident. The nuclear industry considers any water uncovering of the fuel rods as core damage.

Before I continue to steal the rest of the blogger’s excellent material, let me point you over there to see the his charts and diagrams on Fukushima-Daiichi.

Mompson said…
That's some great stuff, thanks for posting! Helps us see through the media trying to sugar coat everything.
April 10, 2011 at 2:29 PM

Steve Darden said…
Thanks 10^6 David. It is unlikely I would have found Daniel's data site absent your post.