The Next Big One 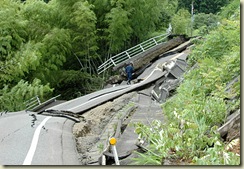 Want to predict the next big earthquake – here or anywhere else?

NEARY: Yeah, now, a lot of people feel that in order to be ready for an earthquake, you need to know when it's going to happen. But you've written a lot about the fact that it's very hard to predict exactly when an earthquake might occur.

Ms. HOUGH: Well, we can't predict right now, within a short term, within a short window, when the next big one is going to hit. And we really can't make strong statements about earthquake likelihood within even 10 years.

And so that scientific problem has received a lot of attention. It just hasn't made any traction in a useful way. So what we focus on instead is what we call forecasting, which is looking at the expected average rates of earthquakes, and so, you know, what are we up against on average in the next 30 years? And that's the basis for our preparedness.

Back in the late 60s, a conclave of psychics predicted that a large chunk of California was going to drop into the sea via an earthquake at a precise time.

Ms. HOUGH: If you were going to predict an earthquake, you would have to basically see something from the Earth, some sort of signal that's heads-up, a big earthquake is coming.

And a lot of signals have been looked at, investigated, proposed, and none of them have held up to closer scrutiny. So people might think they see radon fluctuations before an earthquake. An earthquake happens, and there was a radon blip.

Well, you need to test that hypothesis and look at radon systematically and look at earthquakes. They're difficult studies to do because we can't run the experiment. We just have to wait for the earthquakes to happen.

But when we do run the careful experiments, the precursors that we think we see just don't hold up. So what that basically means is that we can't - we haven't seen anything that tells us that an earthquake is on the way.

Good conversation on NPR about risk assessment (which you can do for earthquakes) between Lynn Neary and Susan Hough, a seismologist at the U.S. Geological Survey.

Remnants of the Japan earthquake