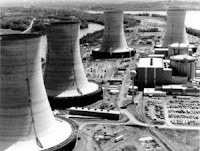 The Washington Post makes a point that is easy to lose sight of while all eyes are turned to Fukushima Daiichi:

History suggests that nuclear power rarely kills and causes little illness. That’s also the conclusion engineers reach when they model scenarios for thousands of potential accidents.
Making electricity from nuclear power turns out to be far less damaging to human health than making it from coal, oil or even clean-burning natural gas, according to numerous analyses. That’s even more true if the predicted effects of climate change are thrown in.

For sake of comparison:

Compared with nuclear power, coal is responsible for five times as many worker deaths from accidents, 470 times as many deaths due to air pollution among members of the public, and more than 1,000 times as many cases of serious illness, according to a study of the health effects of electricity generation in Europe.

The article goes into how the study calculates its figures, but the main issue here is that other forms of electricity production can cause harm simply in the course of producing electricity. Nuclear energy has no capacity at all for doing that. All the nuclear plants in the world have been going along, some as long as 40-odd years, with no harm to the public and with a sterling record of avoiding industrial accidents (here in the U.S. particularly).
The article really puts this all in perspective. Read the whole thing - great job by David Brown.
Three Mile Island. Number of deaths from 1979 accident: none.