Nuclear Energy Workers in Japan and the U.S. 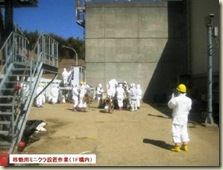 The New York times ran a much discussed article this past Saturday about workers at Fukushima Daiichi and other nuclear energy plants.

Of roughly 83,000 workers at Japan’s 18 commercial nuclear power plants, 88 percent were contract workers in the year that ended in March 2010, the nuclear agency said. At the Fukushima Daiichi plant, 89 percent of the 10,303 workers during that period were contractors.

The Times makes clear that there are cultural factors that weigh into the structure of the Japanese work force:

They [The itinerate workers] are emblematic of Japan’s two-tiered work force, with an elite class of highly paid employees at top companies and a subclass of laborers who work for less pay, have less job security and receive fewer benefits.

Some workers are hired from construction sites, and some are local farmers looking for extra income. Yet others are hired by local gangsters, according to a number of workers who did not want to give their names.

Frankly, the article depends more on hearsay (those local gangsters, for example; and there is no discussion of how many of the contracted workers are highly trained) than on documented occurrences of malfeasance, but for the sake of argument, let’s accept the various assertions even where they are not proved and  somewhat dubious.

How does the American industry measure up to this picture of the Japanese industry? Callous though it may seem, Americans have every right to expect high standards whatever is true in Japan.

First things first: nuclear workers in the United States, both employed by the plants and by contractors, are highly trained for their duties – no farmers plucked from their fields, no gangster-hires. Additionally, the safety culture implemented at plants applies to all workers, so any safety issue that arises can (really, must) be reported.

Second, all workers are measured for radiation exposure – about 120,000 workers in recent years – 90,000 permanent workers and 30,000 temporary workers.

During 2008, the most recent year with complete reporting, no U.S. worker had more than 3 rem of radiation exposure. Three rem is 40 percent below the federal regulatory limit for radiation exposure in a year for nuclear power plant workers.

Additionally, more than half that number had exposures that were less than 10 millirem, the equivalent of a chest x-ray. (I’m picking up this data from here, an NRC report called “Occupational Radiation Exposure at Commercial Nuclear Power Reactors and Other Facilities,” 2008.)

So no, the American industry is not hiring untrained workers off the street nor is it exposing its work force to dangerous levels of radiation.

It’s too early to assert this as a certainty, but worker incompetence appears to have had nothing whatever to do with events at Fukushima Daiichi; and even with heightened attention paid to them, the other nuclear plants in Japan have likewise not shown evidence of worker issues exacerbating earthquake-related problems. When it is wiser to shut reactors down, that’s been done – when they can operate, they do.

Which doesn’t mean the New York Times is wrong to report the story – just that there’s more to the story that needs further explication.

J Wheeler said…
Mark, thank you for your thoughtful perspective. I couldn’t agree with your more, other than to take exception to your characterization of farmers as unskilled labor.

Actually, in the industry we love to “pluck farmers from their fields” because with the right nuclear specific training former farmers make excellent operators and technicians. Many farmers in the USA have business, engineering, or agriculture degrees. A successful farmer has a strong work ethic and is accustomed to complex problem solving. The modern farmer learns the fundamentals of operation, maintenance and repair on many technologies found in nuclear plants such as diesel engines, digital control systems, motors, generators, pumps and piping systems.

Give me a farmer and in six to nine months I’ll have a nuclear plant operator or nuclear maintenance technician!
April 14, 2011 at 9:05 PM

Anonymous said…
Right now, we are between a rock and a hard place— where the probable and possibly best choice for energy in the US is nuclear energy, despite the recent crisis in Japan. What can the United States learn from Japan’s disaster? How can we prevent such a tragedy here? It is a scary thought—I hope that we can come through to handle it… especially if we learn from Japan…
Check out “Nuclear Energy: Lessons from Japan”: http://bit.ly/e02awE
April 15, 2011 at 3:01 PM