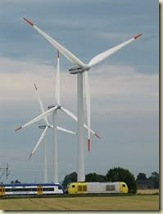 With Germany aiming to shut down its nuclear energy plants by 2022, it needs replacement energy and quickly. Prime Minister Angela Merkel has put forward a 6-point plan to accomplish this. From Der Speigel:

Germany is, if nothing else, proposing to spend a lot of money during a period of austerity – someone might notice that it’s almost all unnecessary at some point.

In all, this could be an energy policy nightmare, with a battery of untried ideas all implemented at once to try not to do what seems most likely – a return to coal if not a basic acceptance that German nuclear plants have been unproblematic.

Many are now asking themselves if the transition to renewable energies will ruin the nation's countryside. The German Wind Energy Association (BWE) states that 21,607 high-tech wind turbines are already in place in Germany. Some fear that the zeal to install wind turbines mirrors the drive to build motorways into West German towns in the 1960s. That was regarded as ultra-modern at the time, but it created massive, irreversible eyesores.

Germany's Federal Agency for Nature Conservation is already warning that in the rush to expand renewable energies, nature and wildlife conservation is being put on the back burner. The need to get out of nuclear power seems to be overriding all other concerns.

“Many are now asking” is not very precise, but the story points out that Germans have gotten quite litigious on NIMBY issues and have become exceptionally well organized on keeping windmills out of their eyesight. And are gearing up against large masts:

In the eastern state of Thuringia, for example, powerful 380-kilovolt power lines are planned that will cut a route directly through the picturesque Thuringia forest region. A number of citizens' initiatives are organizing opposition to the plans. They include members of all political parties.

Oddly, one of the reasons anti-coal activists take that stand in this country is to prevent mining operations from ripping up the countryside. Now, Germans are adopting the same stance about renewable energy sources. Nuclear energy plants, of course, are fairly compact and uranium mining low-impact.

It’s understandable that countries look closely as their nuclear energy plants in light of Fukushima Daiichi and make changes as appropriate. But what Germany is doing is – kooky – and getting kookier by the day.

Anonymous said…
Those things are just really Fugly, with a capital "F". Why anyone would want to cover their country with such monstrosities is really, really crazy. Given a capacity factor of maybe 20% on an intermittant basis, it sure seems like a losing proposition. If you're going to have to live with such ugliness for a lifetime, you might as well ask for better availability.
April 15, 2011 at 7:28 PM

What does this mean? Is this the actual contribution or the fraction of rated capacity or what?
April 15, 2011 at 8:13 PM

crf said…
Are they going to add more international transmission lines from the Czech Republic and France? They probably will have to.

Actually, I don't think that would be a bad idea.

Electricity should be shared across borders in Europe. So if closing Germany's (admittedly aging) nuclear plants results in better, more efficient, electrical interconnections with its neighbours, this may make investment in new nuclear plants (as well as large wind farms or other renewable schemes) in Germany's neighbours more viable. Research and Development in Transmission is sorely needed (lack of reliable transmission, after all, was one of many problems that compounded at Fukushima.) So, since renewables, to be at all useful, need more robust and programmable grids, other forms of energy will automatically take advantage.

Roland Schulz said…
Germany recovered from the recession quite a bit faster and has solid growth and relative low unemployment. Thus the part about the austerity doesn't really apply to Germany. Otherwise I agree. (I'm German and currently live in the US)
April 17, 2011 at 12:11 AM

DocForesight said…
Is this reaction by the German government to close their aging plants due to the risk of earthquake damage in Germany or simply a convenient excuse and knee-jerk response to Fukushima?