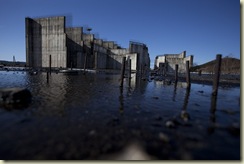 Italy has decided to forestall any decision on proceeding with nuclear energy in the wake of Japan. But they need a plan:

Italy currently gets 80 percent of its energy from fossil fuels and the remaining 20 percent from hydroelectric and renewable energy, according to data from power grid operator Terna SpA. Prime Minister Silvio Berlusconi’s center-right coalition government had made nuclear energy part of a strategy to cut dependence on fossil fuels to 50 percent, reducing imports from abroad and cutting energy prices in the long term.

And that’s something the country really needs to do:

Italian companies paid twice as much for power in 2010 as their French counterparts, 40 percent more than the U.K. and 27 percent more than German rivals, according to Eurostat, the region’s official provider of statistics.

And all those countries do that with nuclear energy – well, Germany for now, anyway. The Italian government isn’t particularly well known for getting things done, but the drive toward nuclear energy had given its energy sector a route forward. For now, at least, Italy seems driveless.

Sources at Poland's Economics Ministry told the magazine that Prime Minister Donald Tusk was planning to invite RWE to take a share of at least 20 percent of the main investor in the project, Polska Grupa Energetyczna (PGE).

The plan is to restart work on a nuclear power station in Zarnowiec near Gdansk, which was stopped in the 1990s. The building work is to be taken care of by the French company Areva.

The story said this news was embarrassing to the German power utility RWE, and the company has denied it was asked to participate. I’m not completely sure why it would be a problem, as RWE’s CEO Jurgen Grossman is quite the fan of nuclear energy whatever Germany’s current view happens to be. But okay.

But my main point of curiosity was the Polish nuclear station. I remember that its first plant, Zarnowiec, was stopped when turmoil overtook the country back in the Solidarity days. And a couple of years back, the Polish parliament passed a resolution supporting the construction of two plants. But after that, there’s been very little news.

Most sources still list the effort to build the new plants as ongoing, but I did find some recent comments from Prime Minister Donald Tusk, responding to a Germany neighbor asking Poland to scrap its plan (this little contretemps may account for part of RWE’s hesitance).

“Calls from a friendly political leader from the other side of the border, Mr. Platzeck, for Poland to stop the project appeared somewhat inappropriate to me. A country that has about 16 nuclear power plants shouldn’t be too concerned with our plans to build the most modern plants available on the market,” the Polish prime minister said.

Matthias Platzeck is minister-president of the German federal state of Brandenburg. One gets the impression that annoying Tusk isn’t a great idea. He wasn’t finished with his German friends, either:

“We can’t succumb to hysteria about it [Fukushima Daiichi],” Mr. Tusk said in remarks from northwestern Poland, near the border with Germany. “The reason for radiological risks in Japan isn’t an accident at the nuclear plant, but an earthquake and tsunami.”

Just so. Still not sure how things are going on those reactors, though Tusk is clearly all in. Here’s the best I could find:

According to government plans on nuclear energy, the proposed plant will have an output of 3,000 MW. The final location for the plant is to be chosen in 2013. Three years later construction is to start, with reactors going online by 2020.

So still some time to rope in RWE – if it can get over the embarrassment.

From Exxon (via the Financial Times – behind a pay wall):

Nuclear energy is too important for world leaders to allow it to decline, said ExxonMobil Chairman, President and CEO Rex Tillerson. He said that the Fukushima Daiichi incident would not stop nuclear's growth but simply "delay" it. "Ultimately, my expectation is the component of nuclear energy that will be in the future mix 25 years from now, or 30 years from now, is probably not changed," Tillerson said.

painlord2k@gmail.com said…
The Italian government decided to delete all the laws made to go ahead with the nuclear plant for two reasons:
1) There is a referendum to abrogate these laws in June. If the government did it before of them, no referendum.
Last referendum about nuclear power was after Chernobyl and put us in this mess (after the people vote, it would be much more difficult). So, it is better let the waters calm down. The retreat is tactic, not strategic.
2) There are other, more problematic referendum in June. But, without the nuclear one, the number of people voting could be less than 50%+1 and the referendum would have no legal value.
April 25, 2011 at 7:39 PM