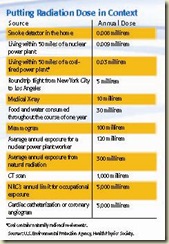 Japan's nuclear crisis has caused a different type of fallout on this side of the Pacific Ocean: Scammers eager to make money — or just create fear — by fueling unwarranted concerns that dangerous levels of radiation have spread in the winds to the United States.

Already, some Americans are rushing to drugstores to buy out supplies of over-the-counter potassium iodide (KI) supplements, which can protect against thyroid cancer. But health officials say there is no need for KI, because no significant radiation hazard has been detected.

Weighing in from Australia:

Professor Barry Brook, the director of Climate Science at Australian University of Adelaide's Environment Institute, said that the crisis will lead international governments to improved measures to protect nuclear plants against extreme natural events, but is unlikely to cut down the use of nuclear power.

"Obviously the problem in Fukushima, has caused a lot of anxiety amongst the public, not just in Japan but also in many western countries, like America, Australia, Britain and France," Professor Brook told Xinhua a reporter in an exclusive interview recently.

"But I think that is impossible (to cut down the use of nuclear power) because of the rapidly growing energy demand."

"It should be kept in mind that the explosions at the Japanese reactors were chemical, not nuclear," Brook said, adding that the radiation dose threat to the public has been small, and no one has been killed so far as a result of the explosion.

None of which is to downplay those anxieties, especially in Japan. I do hope, though, that people research radiation online to quell those fears, at least somewhat. Radiation Answers is a good place to start and NEI’s Understanding Radiation booklet is an honest and thorough introduction.

The Pittsburgh Post-Gazette runs an op-ed by John Metzger, an associate professor and director of nuclear engineering at the University of Pittsburgh. He tells some hard truths:

Despite an outstanding history of safety and reliability, the events at the Fukushima Daiichi nuclear power plants in Japan are causing many to call into question the safety of the nuclear industry. It is important to put these events into perspective.

The incident was not due to any perceived design deficiency, inadequate procedures or inappropriate operator action. It was due to natural events of historic proportions.

It appears the Fukushima plants withstood the largest earthquake in Japan's recorded history and shut down as designed. It was the subsequent tsunami that exceeded any expectations, plus a substantial safety margin, that initiated the chain of events we have all anxiously followed.

This is true also for the area surrounding the plants. Japan is prepared for large earthquakes and tsunamis, but this tsunami caused extensive destruction and thousands of fatalities.

That last bit is rather chilling but worth keeping in mind. Fukushima Daiichi was blindsided by the earthquake and tsunami and so was Japan. This is a country that expects these kinds of disasters to happen and prepares for them, both industrially and as a matter of public safety, but the extraordinary magnitude of this disaster overwhelmed the country top to bottom.

In contrast, due to the quick actions of the Japanese government, the heroic efforts by staff at the Fukushima plants and the plants' robust design, there appear to be no reported fatalities to date due to damage at the nuclear facility. There have been releases of radiation, but so far they have not reached levels dangerous to human health.

Despite what's happened in Japan, the nuclear power industry will remain the gold standard of safety and reliability against which other industries will measure themselves -- even as it reassesses its designs and practices in light of what's happened at Fukushima. In fact, the industry already has begun the reexamination on its own initiative.

All true. Read the whole thing.

Putting Radiation Dose in Context – note that dose rates are not annualized, as the chart says. The pdf is being updated to reflect this. From NEI’s Understanding Radiation booklet. Really – a lot of good information in that book.

jimwg said…
That's a nice chart -- but it doesn't do the nuclear industry or research any good being tacked in the same church. It ought be plastered on the N.Y. Times, on major on-line sites and news forum and following up every event of this incident. Fact and truth is worthless if it's cloistered in a closet! Get that info OUT!
March 26, 2011 at 5:48 PM

Elli Davis said…
I have nothing against of what you have said, however I fear that companies and governments are lacking in testing for such an events. I mean, power plants in Japan have to be constructed in a way that they can survive the earthquake, but why they were not thinking about possibility of flood through tsunami? Why were generators in the flood area anyway?
March 30, 2011 at 3:49 AM