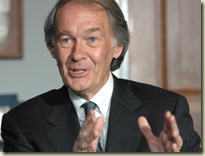 Rep. Ed Markey, D-Mass., introduced a new bill Tuesday that would overhaul U.S. nuclear safety and impose a moratorium on all new nuclear reactor licenses or license extensions until new safety requirements are in place that reflect the lessons learned from the Fukushima reactor meltdown.

A bill like this is what you’d expect after a situation like the one in Japan. Markey raises the rhetorical level a bit in introducing it:

The Nuclear Power Plant Safety Act of 2011 will help ensure that the U.S. fleet of nuclear reactors is safe,” Markey said.  “We should not wait for an American meltdown to beef up American nuclear safety measures.  We must heed the lessons to be learned from the nuclear meltdown in Japan and ensure nuclear safety here in America.”

The NRC is conducting a safety review now, which would seem to fulfill some of Markey’s goals. And since it would take a new plant awhile to come online, approving license applications now wouldn’t preclude applying lessons learned from Japan. That’s true for license renewals, too, unless Markey feels that granting licenses precludes implementing extra safety measures when they are developed.

Push come to shove, I’m not sure what this bill could accomplish in either the short or long term. Well, it could lead to interesting debates in committee and on the House floor. That’s something.

NEI’s President and CEO Marvin Fertel  responds for the industry:

“The NRC chairman testified before a Senate committee today that U.S. nuclear plants are safe and secure, and it is “very unlikely” that the combination of events in Japan earlier this month would occur in the United States. Nonetheless, the NRC is an independent regulator of the nuclear energy industry and therefore can require additional action by the industry as part of its licensing processes. Similarly, Congress has direct oversight of the NRC and has an established process to vet these issues before hastening to legislate changes to the licensing process.

You can find the bill here. The bill’s stated purpose is “To ensure that nuclear power plants can withstand and adequately respond to earthquakes, tsunamis, strong storms, or other events that threaten a major impact.” The text is not available yet, but should be in a day or so.