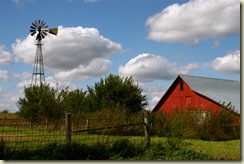 We wrote yesterday about Iowa Gov. Terry Branstad’s support for nuclear energy. It looks like the legislature there is about to act on that support:

The chairman of the Iowa House commerce committee says there's enough support to move a bill that sets out how a new nuclear power plant would be built in the state.

"I still sense there's a lot of support on this bill, especially because there are concerns with a lack of new (energy) generation in this state," said Rep. Chuck Soderberg, R-Le Mars.

That’s from today, so we should know soon how it goes. This story doesn’t actually explain the bill. This one does:

The Iowa Legislature would have to pass a bill to allow the change in energy rates because MidAmerican, even though it's a privately-owned company, doesn't have the authority to set its own rates -- instead regulators set the prices the company can charge, Fehrman said.

At first, I thought this was to implement CWIP - Construction Work in Progress – which allows utilities to charge ratepayers a nominal amount extra to pay for a power plant while it is being built (which benefits customers because it saves on finance charges accrued during construction) and it is, sort of.

This discussion follows a law passed last year that allowed MidAmerican to charge customers a total of $15 million to pay for a three-year study looking into the viability of building a nuclear plant in Iowa.

So, presumably, the company wants to do this without taking out a loan, which would cost customers more.

"Any money that customers pay up front -- it could be a small percentage increase -- but in the long run it will save the customers an incredible amount of money if we can get nuclear done," [state Sen. Randy] Feenstra said.

Yes, that’s CWIP, though not exactly for a construction project.

So, early days for this effort. But with the governor on-board, it’ll be interesting to see if this passes both houses in the next weeks. Fingers crossed.