Iodine-131: Not an Issue in the United States 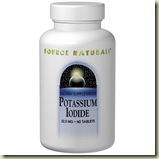 Here’s the bottom line first: no one in the United States is in danger from iodine-131, a radioactive isotope present in discharges from Fukushima Daiichi. No one needs potassium iodide to combat it because there is no danger of it. Got it? Let’s proceed:

NEI has a new fact sheet on iodine-131, about which Japan has issued a warning. This is from NEI’s update this morning and posted below:

Japanese authorities have advised Tokyo residents not to provide municipal drinking water to infants or use it in mixing powdered milk for infants because of abnormal levels of radioactive iodine (I-131) detected in the drinking water. One water sample (5,700 picocuries per liter) indicated approximately twice the Japanese government guideline and prompted the restriction for infants. In an emergency in the United States, state and local officials would closely monitor food and drinking water supplies and quarantine any contaminated supplies as needed to prevent public exposure. U.S. officials use pre-established guidelines for safe consumption of food and water set by the U.S. Food and Drug Administration.

Iodine-131 can roost in the thyroid and eventually cause cancer. It is considered dangerous to infants, children, pregnant women and fetuses, but not really to anyone (other than pregnant women) after age 20. Potassium Iodide is recommended when there is iodine-131 present – it floods the thyroid with iodine so iodine-131 finds no way to enter, but care has to be taken with it.

There are definite reasons not to fool around with potassium iodide. The American Association of Clinical Endocrinologists, the American Thyroid Association, The Endocrine Society, and the Society of Nuclear Medicine issued a letter to explain this:

However, KI [potassium iodide] should not be taken in the absence of a clear risk of exposure to a potentially dangerous level of radioactive iodine because potassium iodide can cause allergic reactions, skin rashes, salivary gland inflammation, hyperthyroidism or hypothyroidism in a small percentage of people.

So there you go. Read the fact sheet, read the letter and be informed.