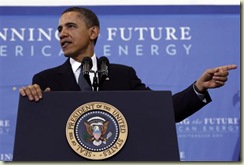 The full transcript is here.

At it, he introduced his Blueprint for a Secure Energy Future, which takes an all-of-the-above approach to energy, with an eye to ramping down foreign imports in favor of domestic production – of oil, particularly.

So today, I’m setting a new goal: one that is reasonable, achievable, and necessary.  When I was elected to this office, America imported 11 million barrels of oil a day.  By a little more than a decade from now, we will have cut that by one-third.

I set this goal knowing that imported oil will remain an important part of our energy portfolio for quite some time.  And when it comes to the oil we import from other nations, we can partner with neighbors like Canada, Mexico, and Brazil, which recently discovered significant new oil reserves, and with whom we can share American technology and know-how.

All of this means one thing:  the only way for America’s energy supply to be truly secure is by permanently reducing our dependence on oil.  We have to find ways to boost our efficiency so that we use less oil.  We have to discover and produce cleaner, renewable sources of energy with less of the carbon pollution that threatens our climate.  And we have to do it quickly.

He runs through a number of energy sources before coming to nuclear energy. Given the events in Japan, one might expect the atom to go unmentioned or passed by with a glance. Not so:

Now, in light of ongoing events in Japan, I want to say another word about nuclear power. America gets one-fifth of our electricity from nuclear energy. It has important potential for increasing our electricity without adding carbon dioxide to the atmosphere. But I’m determined to ensure that it’s safe.  That’s why I’ve requested a comprehensive safety review by the Nuclear Regulatory Commission to make sure that all of our existing nuclear energy facilities are safe. We’ll incorporate those conclusions and lessons from Japan in designing and building the next generation of plants. And my Administration is leading global discussions towards a new international framework in which all countries operate their nuclear plants without spreading dangerous nuclear materials and technology.

The speech only touches on renewable energy and virtually ignores coal, clean or otherwise, focusing instead on biofuels, natural gas, oil and energy efficiency – and nuclear energy.

I'm not sure the inclusion or exclusion of any source should be over-interpreted – this is a speech not an encyclical – but I was admittedly surprised at the absence of coal. Even the inclusion of nuclear energy was not too startling: the President mostly reiterated what he had already said about nuclear energy in his speech about the Japan earthquake.

A second major point of the speech is President Obama’s strong support for a clean energy standard:

A Clean Energy Standard will broaden the scope of clean energy investment by giving cutting-edge companies the certainty they need to invest in America.  In the 1980s, America was home to more than 80 percent of the world’s wind capacity, and 90 percent of its solar capacity.  We owned the clean energy economy.  But today, China has the most wind capacity.  Germany has the most solar.  Both invest more than we do in clean energy.  Other countries are exporting technology we pioneered and chasing the jobs that come with it because they know that the countries that lead the 21st century clean energy economy will be the countries that lead the 21st century global economy.

A Clean Energy Standard will help drive private investment.  But government funding will be critical too.  Over the past two years, the historic investments we’ve made in clean and renewable energy research and technology have helped private sector companies grow and hire hundreds of thousands of new workers.  I’ve visited gleaming new solar arrays among the largest in the world, tested an electric vehicle fresh off the assembly line, and toured once-shuttered factories where they’re building advanced wind blades as long as a 747 and the towers to support them.  I’ve seen the scientists searching for that next big energy breakthrough.  And none of this would have happened without government support.

The point of developing the standard is to provide a clear roadmap for the future so that industry knows where best to make investment.

We’ll round up some responses to this speech later. But, in the meantime, this headline struck us as amusing: “Natural Gas Fuel Stocks Surge on Obama Energy Speech” – in the Wall Street Journal, of course.

jimwg said…
Funny how the Greens and media have gone silent or amnesic mentioning that pure pristine Natural Gas is a greenhouse fossil fuel too.
March 31, 2011 at 7:58 AM