Eisenhower, The NRC and the Today Show 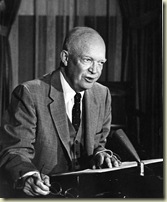 Eben Herrell has written an interesting – and in some ways, a rather lovely – article for Time that further explores the issue of fear and nuclear energy. He ties it to Hiroshima, trying for a historical, even cosmic, linkage, but this bit struck me particularly:

Since the dawn of the atomic age, proponents of nuclear power have tried to use the fact that binding energy can power cities as a balance or absolution for the fact that it can also destroy them. Eisenhower dubbed it "atoms for peace" and spoke of turning nuclear swords into nuclear plowshares. It's a beautiful vision…

It is a beautiful vision – the modern swords into plowshares program is called megatons-to-megawatts – you can read more about it here – and it’s worked exceptionally well. Herrell says some things I don’t find particularly agreeable, but this part works well enough:

It seems perfectly reasonable to me to argue that we should continue to support nuclear power as an alternative to fossil fuels. Simultaneously, it seems right to push regulators in the U.S. and abroad to demand the highest possible safety standard from nuclear operators—even if they complain that doing so will make them insolvent. Depending on the energy sources available to them, some countries may choose to subsidize nuclear power.

Frankly, I think Herrell underestimates how the free market and policy makers work to achieve goals, even when they might seem (to some) counterintuitive. If nuclear energy gets you where you want to go, you go there. You find a way. The events in Japan may have the outcome he suggests, but it may also show that safety standards are very high – in this country, very high indeed.

But, as always, time will tell.

The Today Show’s Tom Costello has a tour of a nuclear plant – Louisiana’s Waterford – and it goes rather well. Costello says he was given open access by Entergy to show how secure and safe the plant is – and by extension, all plants. He also notes that Waterford was more than strong enough to withstand Hurricane Katrina and never flooded. Very nice introduction for people who have never seen up close how a nuclear energy plant works.

Be prepared for an annoying pancake ad.

I’ve read articles in the Japanese press that say fairly bluntly that the 50 mile Emergency Planning Zone (or EPZ) set for Americans in the vicinity of Fukushima Daiichi was much too panic stricken for the situation and at odds with a (potentially) similar situation at an American plant, where the EPZ is typically 10 miles.

The situation was ambiguous enough that there wasn’t much more to do than note it and see if an explanation emerged – or was even necessary. After all, the State Department doesn’t need to adhere to anything but its own judgment.

The Nuclear Regulatory Commission has now responded on its blog. It’s a little complex and worth grappling with in its entirety to understand it wholly, but here’s the takeaway:

The Japanese have been confronted with extremely challenging circumstances wrought by a record earthquake followed by a massive tsunami. As the NRC carefully monitored developments there, the agency used the best information available to it to make a protective action recommendation to the U.S. Embassy in Tokyo for Americans within 50 miles of the six-reactor Japanese site, which was experiencing problems in four reactors and two spent fuel pools.

Were a similar accident to occur in the U.S., the response would be guided by the same considerations. But it is worth noting the United States has no nuclear complexes of this size.

So the sheer size of Fukushima Daiichi weighed in more heavily than what was actually happening at the plant. The post also explains that the EPZ of an American plant could expand to 50 miles if the situation warranted it. NRC can couch things in the language of regulation – that’s how it rolls – but the 50 mile EPZ also could be called the simplest, safest advice to offer from so far away.

You can watch President Dwight Eisenhower’s Atoms for Peace speech (delivered at the United Nations) at YouTube.