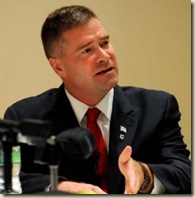 PSEG President and Chief Operating Officer William Levis does not discount or play down the events in Japan:

Levis acknowledged that the events in Japan went beyond what engineers there had planned for and said U.S. companies would have to re-evaluate the "design basis" for their own safety plans.

"We'll go back and relook at this too, just to ensure ourselves that we've got this right," he said.

But he does not back away, either:

Levis said the crisis in Japan shouldn't affect plant license renewals in the U.S. because the renewals here relate to managing aging equipment.

"There's nothing that happened in (Japan) that looks like it's related to aging management, so I would think that they would go on," Levis said, referring to license renewals. "But I also recognize that there is some need for caution and some additional questions that need to be asked."

Neither is Rep. Chris Gibson (R-N.Y.) discounting the need for increased scrutiny of American nuclear plants:

"In light of Japan, let's make sure we study it very closely to understand what happened there," Gibson said. … "I would think all communities would be interested in knowing all the facts," he said. "Going forward, education is going to be very important here. Any licensing decision must be based on facts."

And clearly, Gibson is not backing away: