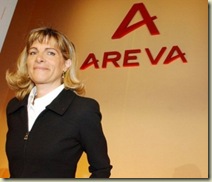 This speaks for itself:

Yukiya Amano said he expects conference participants to make an initial assessment of the accident at the Fukushima Daiichi nuclear plant in northeastern Japan, which was hard hit by an earthquake and tsunami on March 11.

The CEO of French nuclear reactor maker Areva says she will meet with Japanese officials to improve the situation at the quake-damaged Fukushima Daiichi nuclear power plant.

Speaking to an NHK reporter on her arrival at Narita Airport, near Tokyo, on Wednesday afternoon, Anne Lauvergeon pledged full cooperation. She brought along a team of experts, the first such group to arrive from France since the outbreak of the incident.

Good for AREVA. It’ll be interesting to find out what they do there.

But why leave it to the French?

The Japanese and U.S. governments are working together to tackle trouble at the Fukushima Daiichi nuclear power plant.

The groups include members of Japan's Nuclear and Industrial Safety Agency and related ministries; U.S. military forces stationed in Japan; and the U.S. Nuclear Regulatory Commission.

jimwg said…
Bizarre Priorities
It's certainly not exclusive to Fox, so when they take the time (4 minutes) and trouble to invite a snake handler to explain about the Bronx Zoo's runaway baby cobra and the habits and habitats of cobras, how toxic its venom is and how to treat the bite and who to call if you spot it, then the next feature is a 5 second fear-bite about radiation turning up in Washington milk. Five seconds of alarm, not education. They just couldn't spare merely 15-seconds describing what low levels and health effects it is relative with other toxins and chemicals to allay a panic or more unreasonable doomsday nuclear-phobia -- unless this is exactly the effect the "enlightening" media desires. I hope the nuclear industry/research really grasps that there's a snowballing passion out there to _bury_ them and takes the fight to the media for minds and souls with fact and perspective over fear.

Charles Monneron said…
why leave it to the French ?

Simply because they do reprocessing and Japanese use their technology. The domain of expertise of the few people that were sent was decontamination of water, something that must be very common in reprocessing.
March 31, 2011 at 10:43 AM