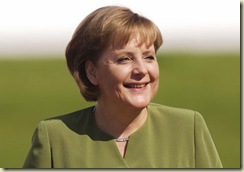 Angela Merkel's U-turn on nuclear energy became even more gear-crunching on Tuesday when she announced the temporary closure of seven of Germany's nuclear power stations.

The chancellor said that reactors built before 1980 would be taken offline while an urgent review of their safety was carried out.

"Safety has the priority in all our deliberations," Merkel declared after she met politicians from affected German states.

This isn’t enormously surprising, as Germany has a rather fraught relationship with its nuclear plants. Put Germany in our search box and you’ll see we’ve covered German top-spinning over nuclear energy for a long time. So another whipsaw fast change in the wake of the events in Japan seems wrong-headed but not completely unexpected.

In any event, I thought, if Germany has to import electricity, it’ll probably get a fair amount from neighbor France – which of course would be a bit hypocritical.

What I didn’t know was how much political calculus was involved:

Sunday's election in Baden-Wuerttemberg is viewed as the most important of seven state ballots this year. The south-west region is the only one where her centre-right coalition has to face state voters. Its chances of re-election are "small and they have become smaller" due to the nuclear story, said Nils Diederich, political science professor at Berlin's Free University.

Baden-Wuerttemberg is a large state in the southwest that borders France and Switzerland. Since it is one of the most conservative areas in Germany, this is bad news for Merkel’s coalition. But Germany has 16 states and the move against nuclear may not play well on a national level – perhaps not even in Baden-Wuerttemberg:

"The abrupt turnaround hasn't helped," said pollster Manfred Guellner. A majority of her voters "were for using nuclear power, and still are after Japan - and they will be confused by such an abrupt change of course."

Rock, meet hard place. If this move works for Merkel’s party, well, good for her. But the sum of the equation is that she hasn’t helped her country by acting so precipitously – the NRC and the nuclear industry here are doing what Germany is doing without closing the plants – and she may not be helping her party’s cause. We’ll know soon enough.

Angela Merkel – an attractive shot. German newspapers tend to run really harsh pictures of their politicians. Not sure why – but not this time.