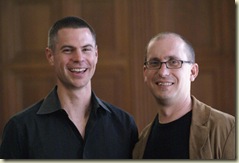 Ted Nordhaus, Michael Shellenberger and Jesse Jenkins of the Breakthrough Institute, a think tank with an energy focus, weighs in on Japan over at the Atlantic.

Acceptance of, and even vocal support for, nuclear power under such circumstances [Fukushima Daiichi] would have been unthinkable even a decade ago. But as many leading greens have come to terms with the potentially catastrophic risks of climate change, they have begun to reconsider the far more modest risks associated with nuclear power. There is no credible path to global emissions stabilization absent enormous quantities of new nuclear power. It is, quite simply, the only low carbon energy technology available today capable of producing large quantities of low carbon baseload power on the scale that the rapidly growing global economy demands.

And the “greens” they are referring to?

… [I]nfluential greens and liberals, from the UK Guardian's George Monbiot to The Atlantic's Josh Green have used the occasion to pronounce their support for nuclear power. Even leading green groups like NRDC and EDF have mostly kept their powder dry in the days since the accident.

The Breakthrough Institute triad are not altogether convinced nuclear energy has a strong future in the developed world, though it has a very strong one in the developing world. I beg to differ, but that’s not the point, really. The point is that logic lead them to nuclear energy.

I was interested to see a change of heart on the part of George Monbiat:

Yes, I still loathe the liars who run the nuclear industry. Yes, I would prefer to see the entire sector shut down, if there were harmless alternatives.

But there are no ideal solutions. Every energy technology carries a cost; so does the absence of energy technologies. Atomic energy has just been subjected to one of the harshest of possible tests, and the impact on people and the planet has been small. The crisis at Fukushima has converted me to the cause of nuclear power.

Pretty good, I guess, for someone who considers the industry a pack of lying hyenas, but there you are. The logic of nuclear energy and - though the situation in Japan is not yet resolved – its safety, conspire to make arguments in its favor compelling.

It may seem sometimes like a long crooked road, but coming to a last mile marker that distresses you – as it does Monbiat – yet has the qualities you want seems – somehow – liberating.

Ted Nordhaus and Michael Shellenberger of the Breakthrough Institute.