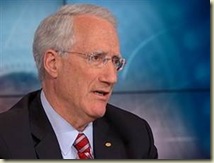 NEI President and CEO Marvin Fertel has an article up at CNN:

The Fukushima Daiichi nuclear power plant crisis in Japan understandably caused many Americans to worry and ask: Could that happen here? It's the most frequent question I've received in the past two weeks.

The answer is twofold: First, one can never entirely rule out the possibility of a natural disaster battering even a super-hardened industrial facility. That's why the independent Nuclear Regulatory Commission has strict standards and why the industry exceeds them for safety, security and emergency preparedness at U.S. reactors.

Second, because it would be foolish to rule out such possibilities, the U.S. nuclear energy industry will do what it has done since the Three Mile Island accident 32 years ago -- apply the lessons learned from Fukushima to make American nuclear energy facilities even safer than they are today.

He discusses the work being done at all 104 nuclear plants to ensure that they can withstand a severe natural disaster, then makes a key point:

The two nuclear power stations in California, for example, have some of the most stringent earthquake requirements. And think back just a bit: Nuclear power plants have safely shut down during the blackout of 2003 and withstood extreme hurricanes, including Katrina in the Gulf Coast and Andrew in South Florida.

And while he does not shy away from events in Japan, Fertel keeps them in perspective:

The imagery from Japan, as unsettling as it is, has a context. That nation is remarkably vulnerable to seismic activity and tsunamis. We should not extrapolate earthquake and tsunami data from one location in the world to another when evaluating the risks of natural hazards.

Nonetheless, the global nuclear industry will conduct an exhaustive inventory of lessons learned from Fukushima and incorporate safety enhancements to existing plants and new plant designs.

SteveK9 said…
NEI is fortunate to have Marvin Fertel. I have rarely seen a public spokesman that is more calm, reasonable and rational. Frankly, Marvin projects an air of trustworthiness because he does not sugarcoat anything, but always gives the straight story.
March 25, 2011 at 2:10 PM