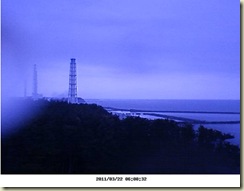 TEPCO believes the tsunami that inundated the Fukushima Daiichi site was 14 meters high, the network said. The design basis tsunami for the site was 5.7 meters, and the reactors and backup power sources were located 10 to 13 meters above sea level. The company reported that the maximum earthquake for which the Fukushima Daiichi plants were designed was magnitude 8. The quake that struck March 11 was magnitude 9.

Smoke seen from Fukushima Daiichi reactor 3 on Monday subsided after about two hours. Water pressure and levels at the reactor were unchanged through the episode, as were radiation levels, the company said.

The site was temporarily cleared of workers after smoke rose from the secondary containment buildings that house reactors 2 and 3. The Nuclear and Industrial Safety Agency said the smoke from reactor 2 caused radiation levels downwind to rise for about three and a half hours.

TEPCO continues work to reconnect external power to all six reactors. Connections were made to the distribution line at reactor 1 and 2, and components and circuits at those reactors are being checked. Similar power connections have been made to reactors 5 and 6 and a diesel generator is providing power to a cooling pump for the used fuel pools. Power cable is being laid to reactor 4, and power is expected to be restored to reactors 3 and 4 by Tuesday.

Japan’s Chief Cabinet Secretary Yukio Edano announced that Prime Minister Kan has ordered the governors of four prefectures near Fukushima to restrict the shipment of spinach and “kakina,” another leafy vegetable. The shipment of milk from Fukushima prefectures was also restricted. Edano said the order was a precautionary emergency measure.