Japan: Energy Plants All in A Row 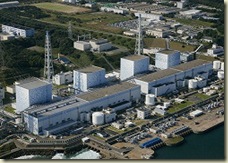 An interesting article at the Mainichi Daily News suggests a series of problems with nuclear energy in Japan – or its management, anyway.

overconcentration of reactors in limited areas, dangerous stockpiles of spent nuclear fuel near reactors, and the inability to easily share electricity across eastern and western Japan.

The ones that puzzled me when the Fukushima plant entered the news was the first (if the Japanese use dry cask storage, the second is no problem at all).

I don’t believe Americans or French site plants the same way as the Japanese do, but this list suggests that weaknesses in the grid argued in favor of keeping reactors and power plants bunched in fairly tight formation along either side of the island.

I’m not competent to know if this really represents a problem – Japan hasn’t had a significant problem in the forty or more years it’s used nuclear energy, and the blows taken by Fukushima Daiichi might relate to siting or to inadequate safety measures or to another issue entirely – we will not know this for awhile.

Japan, including Tokyo, runs on 50-hertz power, while western Japan, including Osaka, is on 60-hertz. In order for one region to receive electricity from the other region, the frequency must be changed.

That just seems odd – I wonder if you have to travel with converter plugs from one part of Japan to the other. Presumably, though, the Japanese figured out how to bridge this a long time ago and it’s not really an issue.

But this is more interesting:

There are a total of 10 nuclear reactors at the Fukushima No. 1 and No. 2 nuclear power plants, demonstrating a high concentration of nuclear reactors in limited areas. Those reactors are expected to be scrapped or stay shut down for an indefinite period of time, meaning the power shortage will continue. A senior official of a power company in western Japan commented, "This is a side effect of concentrating nuclear reactors in a particular region."

Is it? I can’t help but wonder what would have happened if a tsunami had swept over an off-shore wind farm or the earthquake caused an explosion at a gas-fired plant. It seems less about the nature of nuclear energy to have had this result than it is the clumping of any kind of energy source.

And the Japanese certainly do that:

There are 55 nuclear reactors, including experimental ones, across Japan, but many are concentrated within a few prefectures. TEPCO runs 17 reactors in Fukushima and Niigata prefectures, while the Kansai Electric Power Co (KEPCO) has 11 just in Fukui Prefecture. Of 14 reactors being built or planned for construction, eight of them are going on the premises of existing plants.

Why? Let’s try this a different way: consider the lack of available land in Japan, the energy demands of its population (127 million strong and technology mavens to boot) and Japan’s lack of natural resources. Nuclear reactors make a lot of electricity without needing much fuel (to import, as Japan imports everything; we can agree, I think, that most uranium comes from parts of the world that do not throw up strong security concerns, an extra attraction) compared to other sources and the plants are relatively compact.

As a result, The nuclear plants have done an extraordinary social good in allowing Japan to continue to grow as a world market and allow its people to fully participate in the modern age.

But that doesn’t mean Japan didn’t raise its overall risk a notch or two – which I’m genuinely not sure about and the story asserts but does not address in any systematic way.

Fascinating story – I don’t think it fully addresses its premise, but it’s a premise worth exploring and really gets you thinking about the different ways countries address energy policy.

Fukushima before the earthquake.

ExplorerSG1 said…
It looked like Japan has some snow (ice) already fallen in the mountains. So if they are pouring water in to cool the rods, Japan may reduce the amount of water currently being poured in by utilizing snow instead or water thus cutting the amount of water required to possibly half its volume to cool the rods; thereby pooling amounts of water will also be reduced in half from its current amount collecting. Concrete pump should be able to pump the snow slurry.
April 1, 2011 at 3:42 AM

Anonymous said…
There is another aspect of the relatively high density "build" in the Japanese nuclear energy infrastructure, and this is a truth that you won't see printed in the mainstream and only in relatively few places in the blogosphere (mainly where I have posted). And that is this. Not a lot of people know, but in the 1970s and 1980, several of the Japanese utilities tried to acquire land for building nuclear plants around the country in a more dispersed manner. They were denied permits to do that. Why? The burgeoning Japanese anti-nuclear movement prevented it. The utilities were not allowed to acquire the land to do a more dispersed, diverse build.

The upshot of that, as we have seen in this country, is that they were forced to build new units to meet growing demand on sites already approved for power generation. Where were those? Well, older sites with older units, like Fukushima Daiichi, where the older units were built on the coast using once-through recirc water cooling because they had access to a large thermal reservoir.

So, the anti-nuclear forces in Japan bear a large share of the blame for siting mutliple reactors where they have been. The companies had no choice, they had to meet the growing electrical demand, but were forced into building on existing, pre-approved sites.

Betcha didn't know that, didja? Betcha haven't read that anywhere before, especially the mainstream press.
April 1, 2011 at 9:47 AM