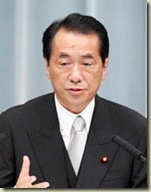 At present, it is not known what caused the water around Fukushima Daiichi Unit 3 to show high radiation levels. The AP lists several possibilities – as have many news sources:

The possible breach in Unit 3 might be a crack or a hole in the stainless steel chamber of the reactor core or in the spent fuel pool that's lined with several feet of reinforced concrete. The temperature and pressure inside the core, which holds the fuel rods, remained stable and was far lower than would further melt the core.

So, the AP doesn’t know. Nobody really knows yet. When we see a definitive explanation for this event, then we can determine its seriousness, but not before then.

Prime Minister Naoto Kan said in a address to the Japanese people:

“The situation at the Fukushima Daiichi power plant is still very grave and serious. … We must remain vigilant. We’re trying to prevent a deterioration of the situation and we are still not in a position where we can be optimistic. We must treat every development with the utmost care.”

“We must treat every development with the utmost care.” That’s exactly right.

Anonymous said…
Thanks so much for these reasoned updates. They are a great antidote to the non-news.
March 25, 2011 at 1:36 PM

Anonymous said…
NISA reports that there is a large concentration of Cl-38 in the contaminated pool. Since Cl-38 has a short half-live, it semms that it is produced inside the plant after the reactor shutdown.
criticality event in progress?
March 25, 2011 at 10:43 PM