The Plants in (and Around) Iowa 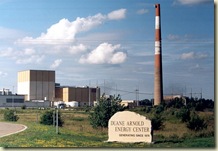 While the Nuclear Regulatory Commission gears up to take a close look at U.S. nuclear plants, it makes sense that newspapers play watchdog and pore over the records of plants in their vicinity. That’s what the Chicago Tribune and the Des Moines Register have done with plants in and near Iowa:

The newspaper, which reviewed Nuclear Regulatory Commission records, reported that Nebraska's Fort Calhoun Station is one of three plants in the United States facing the highest level of regulatory scrutiny. That's because the plant's safety systems were found last year to be in danger of flooding, according to records.

Inspectors found the plant didn't have enough sand to fill bags that operators planned to place on a flood wall to protect buildings and equipment.

There's an adequate stockpile of sand in place now, but the plant will continue to be inspected frequently because the violation was consider a "substantial" safety risk.

The other plants in or near Iowa were cited for less serious problems, records show.

In the past five years, the Iowa plant received notification of four violations that occurred between 2003 and 2009, said Renee Nelson, spokeswoman for NextEra Energy Resources, which owns 70 percent of the plant.

No fines were issued. The violations involved a diesel generator problem, a deficiency in drills and planning, failure to complete a checklist before moving fuel bundles and failing to properly notify health personnel.

The plant fixed those things, so:

The NRC determined that the plant "operated in a manner that preserved public health and safety and met all cornerstone objectives," according to the agency's latest assessment released March 4.

I can’t say every plant will do as well as those around Iowa, but it is striking to see the concern for safety, the NRC’s determination to niggle out every little flaw, and the plants’ quick response to their reports. Well, striking if you expected any other outcome, that is.

These should be interesting journalistic exercises – let’s keep an eye out for more.