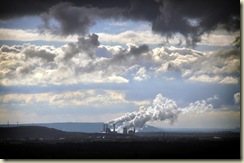 Germany had an election this past weekend. How did that go?

The German chancellor, Angela Merkel, has pledged to press ahead with a review of nuclear power's future in Germany after her coalition suffered a "very painful" defeat in a weekend state election dominated by Japan's nuclear crisis.

Despite the embarrassment of losing a region held by her party, the Christian Democratic Union, for 58 years, Merkel played down the result's national significance, saying she had no plans to reshuffle her cabinet.

That region, Baden-Wuerttemberg, is one of the most conservative in Germany, so it going to the Greens is exceptionally dramatic. It’s the first time the environmental party has won any state election (I believe).

This doesn’t mean Merkel and her coalition are out of power, but  for now, this is the rhetoric:

Germany could well become the first major industrial power to abandon nuclear energy entirely: likely in the next 10-15 years. But others may follow suit. In an interview last week, German Foreign Minister Guido Westerwelle called events in Japan the September 11th of nuclear power. "Some events," he said, "represent such a turning point that afterwards nothing is the same."

I don’t think that quote proves that point, but there you are.

Shutting down a major part of your electricity output while recovering from a recession has the potential to send Germany into an economic tailspin, a reality that has businesses there very nervous:

Ms Merkel’s decision to temporarily close seven nuclear power stations in the wake of Japan’s nuclear crisis has triggered an outpouring of criticism from business lobbies and individual entrepreneurs.

Dieter Hundt, president of the German employers’ federation (BDA), appealed for “politicians to return to good sense, rationality and reliability”.

He condemned the moratorium on extending the life of Germany’s 17 nuclear power stations as “a big mistake”. It failed to stop an anti-nuclear backlash among voters in Baden-Württemberg, who returned a “green-red” coalition of the environmentalist Green party and the centre-left Social Democratic party.

Hans-Peter Keitel, president of the Federation of German Industry, warned in Stern magazine that Germany must “take incredible care not to destroy our economic success in the debate about nuclear energy.

“Electricity in Germany must be safe, clean and affordable, or we will endanger the very foundation of our prosperity.”

And the real irony here: Germany still needs the electricity and renewable energy sources just aren’t mature enough to step in. So, as Merkel predicted last week, if Germany has to buy electricity, the logical place to go – is – France.

Note: Germany and its experience with nuclear energy – essentially a positive one – makes for a richly ironic storyline. But I should stress that the election in Baden-Wuerttemberg occurred on the heels of Fukushima Daiichi and lit a flame under anti-nuclear forces there – leading to the kind of single issue voting that can lead to buyers remorse later. This happens in politics all over all the time. Once the situation has calmed down, the folks speaking the intemperate words quoted in this story and in the linked pieces will recover themselves. Then, we’ll really know what happens next.

So take this story with a large shaker of salt. I’m pretty sure there will be further developments none of us could predict now.

A nuclear plant near Dusseldorf. Lonely, isn’t it?

Horizon3 said…
What is going to happen is, Germany will be forced into wealth redistribution, just like the US. They will be forced to buy electricity from other European countries like Austria, Poland, Spain, and Italy.
I really! really! hate this globalist carp.
March 30, 2011 at 8:00 PM

Anonymous said…
Well, as one particularly despicable political demagogue in this country said, never let a good crisis go to waste. So it is no surprise that the Greenies would jump on this tragedy and exploit it for politcal benefit. Despicable, but not surprising.
March 30, 2011 at 8:55 PM

Pol H. D. said…
Today Germany produces already 12 GW Photovoltaics on the grid - more than they do with nuclear power. Renewable energy sources will easily replace nuclear power in places where politicians and people make the correct choices. Of course large energy utility companies will loose their monopoly as people will take control of their own needs.
March 31, 2011 at 2:26 AM

No they don't. On average throughout the year, Germany produces much less than a single GW.

jimwg said…
I wonder, is it _really_ as much safety concerns or an implacable philosophical distaste for anything nuclear that drives Greens (i.e. the atom must be banished for the so unnaturally alien manner it killed humans at Hiroshima and Nagasaki?).
I mean if you're against _anything_ nuclear no matter how many safeguards or restrictions there are (even if it's nuclear-powered spacecraft), what else is there to think?
March 31, 2011 at 9:10 AM

JimB said…
I think the idea of Germany "attempting" to phase out nuclear power is a great idea. We can learn a lot from watching another country's mistakes in energy management. It will be interesting to see at what point their grid begins to become unstable and how much their energy will cost. If it works...more "power" to them. If it doesn't...it will be a cheap lesson for the rest of us.
March 31, 2011 at 9:55 AM