Pew and the Transient Nature of Polling

The Pew poll has come out and found – surprise! – that events in Japan have raised opposition to nuclear energy. Now, we should note that Pew has always been one of the roughest polls on nuclear energy, much more so than the TV network polls or Gallup. I’m not enough of a poll hound to know why this should be so, but approval of nuclear energy has rarely shivered above 50 percent at Pew – it’s gotten over 60 percent at Gallup, by way of contrast.

At Pew, support is now at 39 percent. That seems pretty depressing, but it is driven by a story that has gotten notably sensationalistic coverage – and a lot of it - in the press. Happily, I didn’t even have to maneuver myself into believing that that explains things – Pew did it for me. Take a look at the chart below: 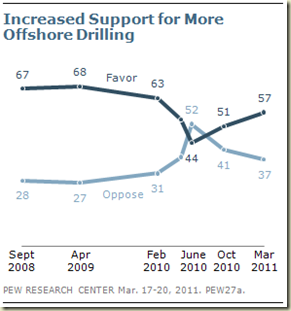 You’ll notice that support for offshore drilling also dropped – for awhile – for some reason - last year, hitting 44 percent, a larger drop in points (in Pew terms) than nuclear energy lost this year. It hasn’t completely regained that loss, but it’s on its way.

Now, it’s often said that Americans have short memories and don’t learn the lessons of a crisis. Don’t believe it. What really happens is that the result of a crisis rarely matches the hysteria that accompanied it and people resume their previous view unless there’s a compelling reason not to. Thus it was with the BP oil spill.

It’s logical that poll numbers droop after a dramatic event takes place – it’s why opportunists use such events to try to make those numbers permanent and bend public policy to their will. But the public doesn’t really work the issues that way.

So dire numbers from Pew while an emergency is going on? – eh!

We don’t mean to downplay the seriousness of the events in Japan. They are very serious. But do look at polls at such times with a mildly fishy eye. They tell you less than what you need to know.