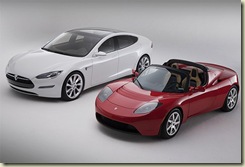 What about electric cars?

Plans in Europe call for about 1 million EVs on the road by 2020, and a lot that push centers around increasing the number of nuclear power plants to feed these vehicles. Let's face it, an EV that's charged via electricity generated at an oil or coal-burning plant doesn't do much to decrease our reliance on fossil fuels, so nuclear makes a lot of sense. And as costly and time-consuming as it is to erect a nuclear facility, it's likely easier and less expensive than relying on solar, wind or hydro-electric energy sources.

So what does all this have to do with electric vehicles? If the events unfolding in Japan lead governments to question the safety and viability of nuclear power, then new plants will be slow to come online. If car buyers know that their EV is likely burning the same CO2-emitting fossil fuels as their neighbor's internal combustion engine, what's the point of paying more for something that's just as dirty, more expensive and not as easy to fuel up?

CHIDEYA: So, are you supportive of the Obama administration's plans to expand the number of nuclear power plants.

Mr. SHAH: Well, we're supportive of carbon emission reductions. And so I think that, you know, that what we're trying to do is to harness the power of entrepreneurial effort to unlock market-driven solutions to climate change. And so if nuclear can stand alone without some of the government guarantees that seem to be very difficult to get through a Congress that is trying to cut cost, then, you know, I think that would be great.

Chideya notes that Shah has had an entrepreneurial interest in solar energy – something that would be dead on arrival absent “government guarantees.” Still, given his own concerns, his words in favor of nuclear energy are striking.

An official overseeing nuclear safety in China has said that the safety of the country's nuclear power facilities is guaranteed, while reaffirming its goal of developing nuclear power as a clean energy source.

"There is a guarantee for the safety of China's nuclear power facilities and (China) will not abandon (its nuclear power plan) for fear of slight risks," said Tian Shujia in response to reports that China will become more prudent toward developing nuclear power.

Remember, these are Chinese officials speaking through an official Chinese outlet. Still, the word is: nuclear energy remains strongly supported.

I’m not a car maven, but I believe this is Tesla Model S and the Roadster. By all means, correct me if you know better.

Horizon3 said…
You might want to throw in that 50% of the cost of building a nuke plant is caused by government and legal over reach, redundant regulations and frivolous lawsuits from environmentalist and anti-nuke groups.Not to mention union labor and their idiocies.

Yes those cars are what you say, and price tagged at well over $500k each. And neither will go over 200 miles on an 8 hour charge.
And that each one of those little charmers (as well as the clunker Volt)carries enough metallic lithium in its batteries to kill the population of New York State. But the proponents of said boondoggles are scared stiff of a few molecules per cubic mile of air of I-131 or CS-137.
March 26, 2011 at 5:39 PM