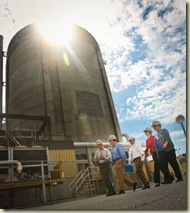 The Anderson (S.C.)Independent Mail has the news:

U.S. Sen. Lindsey Graham [R-S.C.] stood in the welcome center of Duke Energy’s Oconee Nuclear Station and said he had learned something new about his hometown nuclear plant.

“I didn’t know how easy it is to shut down,” Graham said. “There’s one button they can press and it drops the fuel rods. With one button, they can shut down the reactor within a second.”

At stake, Graham said, is a clean energy source for future generations of Americans. Wind and solar power, he said, can’t replace the coal-fired plants that dominate the energy production landscape today, but nuclear can.

And the economic angle:

Graham also underlined the station’s role in the local economy, as it has a $90 million payroll and has paid $27 million in property taxes to Oconee County. About 1,500 people work regularly at the plant, said Richard Freudenberger, the plant’s regulatory support manager. Another 2,000 or so are on site now working with Duke on upgrades and refueling the station’s first unit.

The State covers the visit, too, and adds what we might call the Japan angle:

Nestled in the mountains five hours from the ocean, the Duke power plant couldn’t be affected by a tsunami, he noted. The reactors also are of a different design that ensures they could continue to operate safely in the event of a disaster, he said. He conceded that a broken dam at Lake Jocassee could affect the plant, but said Duke Energy is working on a plan to address such a disaster.

And of course the personal angle:

“This nuclear plant, I live five miles away’’ from, said Graham, R-S.C. “I’ve lived in this area all of my life. A lot of the people I have grown up with and went to high school with work here. I have faith in the American nuclear power industry.’’

Good for him. He’s a consequential figure and his support is appreciated.

Sen. Graham at Oconee. I believe he is second from left, but don’t quote me.